Apparently sometime between this November 20 and 24, we're all supposed to be taking pencil sharpeners to our elbows preparing to gouge each other in a mano-a-mano for the limited new Albert Elbaz/Lanvin's exclusive, not-to-be-restocked collection for H&M. Now, I was a huge fan of the first such guest collection, done by Karl Lagerfeld, and I still wear his jackets (four) I bought in some kind of post-book-publication indulgence from that season. Never before or since have I worshipped so generously at the altar of the Swedish emporium. But, here's a preview of Albert's drool-ready party dresses, in this rather bizarre video, the Lanvin video from the Huff Post, which left me with one impression. We sewists can do an Albert, without a sweat. Just watch... 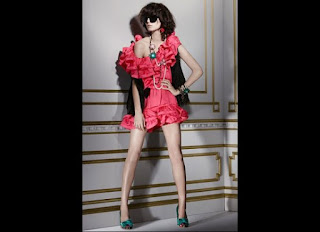 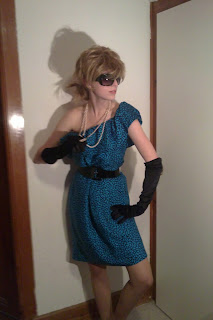 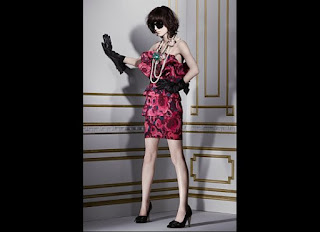 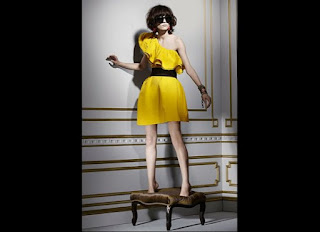 Okay, it's not hard to spot the ringer in blue. It's one I knocked up today from some silk in my stash (purchased in Hong Kong in 1980, for God's sake!) lined in bemberg, and belted, then put it on my daughter when she got home from school. She is a good sport. I hope this inspires all of you to knock up your own "Albert" in a day!
We've got patterns for these on our shelves from the wicked seers of Burda (April and June issues, 2010).  I used the "Latino" dress from April, but perhaps the June blouse has the better ruffles. Your call. You can simply double up and widen the ruffle quotient in stiffer organza silk or go for a silk crepe print, as I did. Albert's rose version would mean laying on ruffles bottom as well as top, which is way too much frosting on my personal cake, while the yellow version doubles the width of the ruffle, and the printed version means wearing the whole thing below your armpits.
On the April Burda cover (French edition) they pulled the dress off one shoulder, while on the bed photo, below, it's more sedate. But any way you cut it, I don't think its worth blinding your fellow shopper over in a catfight. Sorry, Al. 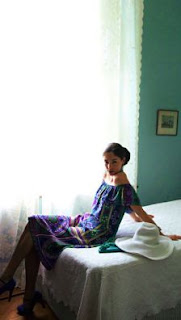 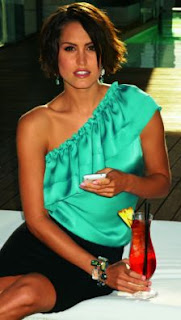