Long ago, when we courted in Hong Kong, my husband wore some really classy pyjama sets in elegant striped cottons. Years later, while celebrating a book sale to editors in London, I trotted off to Sloane Square and found myself forking out 200 pounds for a pair of black Egyptian cotton pyjamas piped in white. Arggh. I realised that men, bereft of sewing nous, (except for Male Pattern Boldness' Peter, of course) were being ripped off right and left when buying good quality cotton sleep wear.
Then we moved to New York, then Switzerland, the years passed, the kids grew taller than their parents, and suddenly one night I looked up and noticed that my dearest was wearing rags to bed. He'd cut off the trousers at the shredded knees and was using a safety pin to fasten the waistband.
How had this happened? 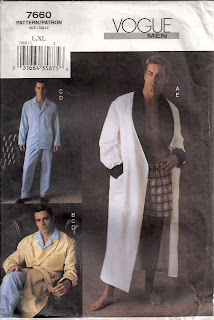 I had a Vogue men's pattern tucked away that I'd never used, but now was the moment, and since making this my go-to pattern, the man is looking much better at bedtime.
For Christmas in 2009, I made the full top and bottom C and D in a sky blue, but frankly, we both found the top more dork than Cary Grant.
For his 2010 birthday, I "production sewed" three more cotton bottoms in pine green, black and navy to wear with a T-shirt. That was only the third time I tried assembly-line cutting and sewing. The first time was to produce simultaneously two Vogue safari jackets at once, in white and black cotton. The other time was sewing two pairs of white Burda jeans last summer.

Laying out, cutting and marking multiple items at the same time is where the big time-saving lies. It's also good to have two machines threaded when you're making jeans or other garments with contrasting top-stitching.
In 2010, I had three machines threaded up for working, stage by stage, on the three pairs of pyjama trousers at once. (None of this involved crippling expense. You can borrow machines for production events. Over the years, I've acquired a sturdy but ancient metal-bodied Brother bought in London's John Lewis in 1975, an Elna bought used at a sewing repair shop on the Upper West Side in New York in 1992, and my daughter's plastic no-name machine from the local hardware/gardening Swiss DIY outlet, which looks suspiciously like a cheapo from the Singer factories in China. What do you want to bet the Swiss cheapo will break down before the 20th-century beloveds?) 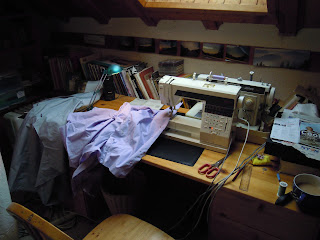 This time, I've done a pale grey pair plus a pale purple pair, so notice only the Brother and Elna machines were up and running, as above. I've just wrapped them up, and none too soon, as he's in bed with a fever and is running out of clean pj's fast. I do hope he's at least better by his birthday Saturday for a little fun.

Do you ever "production" sew? Got any more time-saving tips?
Posted by Inkstain at 05:28