February Burda...Basics dressed up as "looks"

I'm so behind!! The Russians and Germans never let us down, (at least not so far in this century) and here they come already with the February Burda preview! I'm still working on my holiday clothes, and nabbed some great black silk charmeuse for the underdress of the Vogue B-M outfit, and some royal blue silk charmeuse for a Burda ruffled blouse traced out from the ancient issue of...uh...this month. If I finish it in the next three hours, I'll be right on time to trace something new from the now-ageing issue of..um this.January and then get right on the coming new clothes as posted here. Have a look: February Burda Preview. 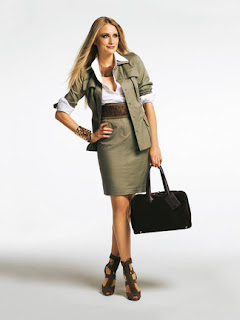 Personally, I'm a little let down by the safari section. As many of you know, I happily anticipate a lot of jungle outings each spring and always do one of the Burda safari numbers. As far as I can see, however, they came up with only one genuine safari look this year, which is basically a shirt with some kind of cargo pocket over a straight skirt my cat could have drafted. 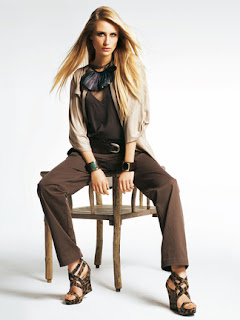 And what kind of "safari" look is this? That's just a pair of brown pants with some kind of beigey chiffony thingie which would last about five minutes on trek. So Burda, don't think that you can add sandals and a pseudo African collar to anything veldt-coloured and call it "safari!" I've been tolerating your confusion of "trench" with "safari," for some years, but this is just brown cotton, tout court. 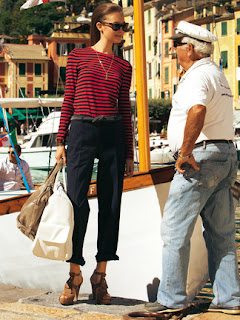 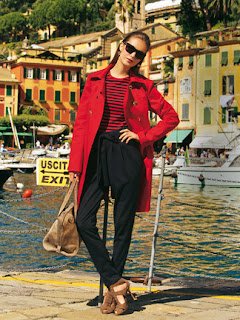 Now for their other stand-by, the spring "marine" look. Here they do a bit better by giving us a variation on the blue and white stripes by doing it in red and black. Wow, I bet that idea took you guys weeks. And then they roll up the cuffs of some pretty ordinary "brown cotton safari pants" (now in black cotton) and call it "marine." I don't see what's so special about that T-shirt pattern, and only a red coat above, saves the day. We'll have to see if that red coat is any more special than the one I made last autumn and just wore out on a snowy day with great cheer in my heart. And there's no way I would wear my red coat with sarouel pants like hers. Actually, there's no way I would wear sarouel pants at all, unless I was in one of the two age groups requiring diapers.
Posted by Inkstain at 02:30