The designer Margaret Howell offered a 'boyfriend' shirt look for this summer. 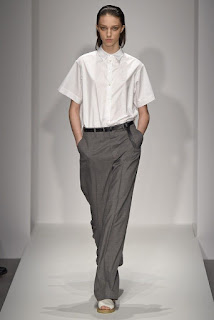 Goodness knows why I tackled such a look when it doesn't even flatter a young woman walking the runway. It features the sort of architectural genderless purity that requires either a waif-life commitment to fugly (as shown) or some flamboyant red lips and black nerd glasses to prove you have to wear a really weird shirt to downplay your incredible sexiness.

Or you are Solange Knowles in transit. Her shirt is even bigger than mine: 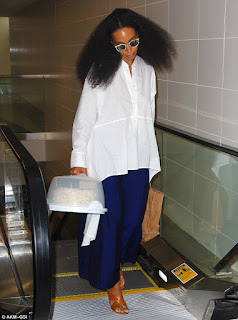 I fit neither category—androgynous or sex bomb . But I bought the white broadcloth anyway.The only big deal of Burda's 'wide white shirt' #113 from February 2015—an unflattering, exaggerated silhouette—was a fan of pleats running down the center back yoke— 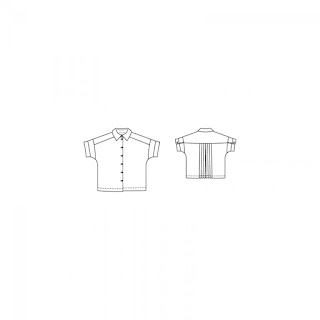 which in my case, of course, won't stay put. You also have to wear it with the top button closed—True Nerd— or else the whole shirt rides up your chest and shifts to the back. (see second photo below) 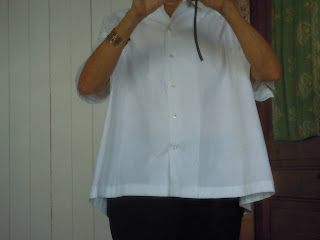 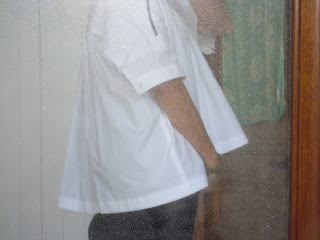 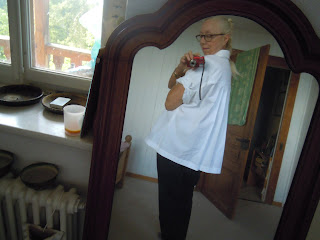 Pictured here, it reminds me of a maternity shirt from the 1950's. Worse, once I washed all the sewing markings off the shirt, the pleats disappeared from the back and the shirt had, of course, completely lost its Reason to Live.

As of writing, this baby needs some help before it is wearable.

The choice is to topstitch down each and every pleat to emphasize the fan-look, or to press down the pleats again and fix them at the back of the waist line, to effect a sort of peplum fan. It's what Burda did with the long dress version, so I'll try the latter, knowing that if that doesn't improve the shirt, I can rip out a single line of stitching and resort to all the topstitching bother.

UPDATE: I did a double row of stitches 10 cm apart across the pleats in the back just at the waist line and now the blouse looks much better. It will be much easier to iron down those pleats, too.