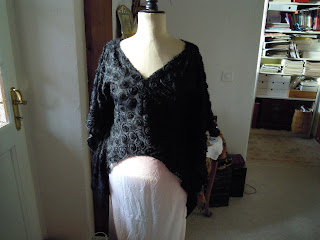 I'm sorry to report that so far, I'm not enthusiastic about the Badgley Mischka dress I'd planned for my first 2011 project. The fabric that seemed so interesting in a Chanel kind of way, black roses on poly chiffon, looks more like a cheap bathroom rug from a distance. With very narrow shoulders, I perhaps shouldn't have chosen this style. It features a V-neck in front and a V-back, and I think you need the shoulders of Charlene Wittstock 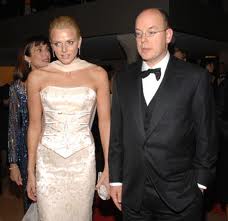 (the future Princess of Monaco and a former swimming champion built like a linebacker) to hold up this design. Frankly, can any dress have a V in both front and back and stay on? Although I used a size eight for the neck, (I'm usually a 12) it was still way too wide and low and required a "dirty fix" of a centre dart immediately: 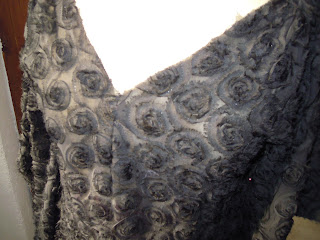 And of course, that killed a lot of my excitement about the project, especially when it had to be done at the back as well, (the thing was still just falling off...) 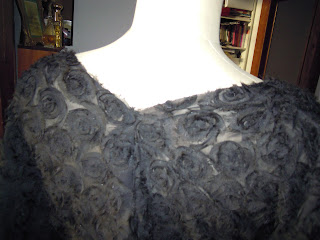 Having finally got the neckline to a manageable position, of course my beautiful bound buttonholes for the inserted belt were now higher than my waist, but not a convincing "empire" height. A lose-lose that I didn't see coming.
The chalk markings for the side seams had by now disappeared and were completely irrelevant as the hang of the garment was adusted, so I tried basting new side seams but couldn't get the thing on. Finally, I decided to forget Vogue's markings altogether and have now stitched up one side (windowside in the photo above) to see if this style works at all.
I'm beginning to think it looks like a bat costume. I have to decide whether to go ahead and finish the ensemble by cutting the very expensive black silk charmeuse I invested in for the underdress or whether to just bin this number.
Posted by Inkstain at 12:53