I thought today I'd be showing you my finished Burda tie blouse but I still have to finish the cuffs. Maybe later. I lost many days editing my latest domestic comic novel about a heartbroken librarian fighting to get back her man, a BBC TV producer, by secretly studying Sun Tzu's Art of War and the ancient Chinese "Thirty-six Stratagems' to be published soon. Look out for lots of sage advice for the lovelorn in a hilarious narrative set in London.

Back to the blouse. I love it and I'm going to wear it tomorrow hosting friends for dinner.  Overall, it's such a simple pattern that I thought anyone looking at the similar recently-released Vogue blouse should ask themselves if they really need four extra seams and buttons and buttonholes when you get the same look in half the time from Burda? 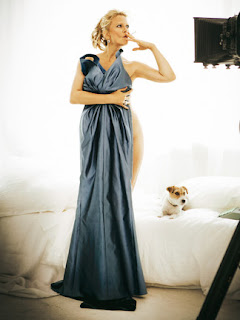 But instead of the blouse, I just had to share this photo with you from the new Burda November issue, (above) wherein, I fear, the Burda people have lost the plot.
Entirely.
Apart from the fact that the model is naked and just holding the dress to her stomach, so we can't really see how it looks on her generous curves, she's smoking to beat the band. She's what my husband calls "envelopée" by which he means fat (and this is not a "plus" dress.)
It's as if there was some kind of collective nervous breakdown at the Burda studios on shoot day. Or a heatwave.
In a weird way, I love it. 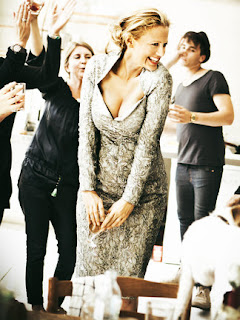 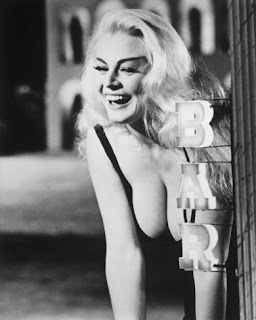 The pressure was on, obviously, during this shoot to get this model into the clothes. Here they are, applauding themselves for squeezing her into this dress, (above.) I fear, friends, we're being sold the "Anita Ekberg" look, which lives on in the collective German imagination, and for good reason:

I see very little in this issue to applaud, especially after their super October offering, with so many classy blouses and dresses. But here's an item that appeals to me, someone who is always tying her cardigan around her hips. 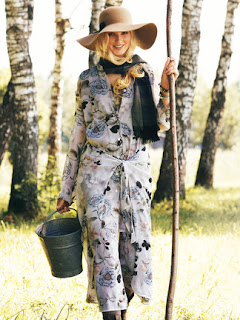 Okay, okay, I'll finish the blouse.
UPDATE:
Oops! German reader Uta sets me straight. We're not looking at a model up top, but one Barbara Schöneberger, a huge German television star. As Uta says, another example, like Carnival and Oktoberfest special editions, of an insider view Burda's domestic readers will appreciate better than us outside Germany.
I'm very grateful to Uta for letting us know that, in fact, in her own clothing, Barbara does not look fat. I hope her libel lawyers appreciate the bold emphasis. And I agree with Uta that it's nice to see normal women featured in fashion or sewing mags.
Meanwhile, neither Uta nor I get the smoking angle.
Posted by Inkstain at 01:28