Oh dear. I've really enjoyed the 2012 Burda Style magazines. In almost every one I've found something to sew, and I've still got a "to-do" list many garments long before the summer is out.

Lucky thing, then, that the August Burda is a MISS! I see that the editor-in-chief, interviewed on the U.S. Burda site, doesn't really specify too much where she gets the inspiration for her collections. To be fair, she says, there are some 600 items for each season to plan. 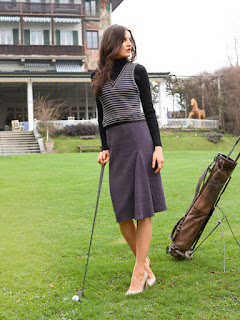 The lovely and lithe Dagmar Billy says she is now planning Spring/Summer 2013; she works nine months ahead of the game. So I'm reckoning charitably that Ms. Billy was on vacation in late summer 2011 and left this issue to an intern.
Or maybe on vacation is where Ms. Billy learned to play golf in high heels? (Do you know how fast that woman would be kicked off a golf course for leaving divots everywhere she walked?) And what are to make of that outfit? It's so utterly witlessly, staid! Retro doesn't mean blah. We just had such lovely references to the 1920's in the July issue, proving that Burda can do Retro properly when they try.

The August issue lacks the thematic clarity and inspiration of previous 2012 issues  and even produces some truly weird styling. Under the rubric, "Do It!" (as in look ridiculous?) It's draggy, bottom-heavy and fattening.
Or the outrageously unflattering Bow-Thing-Sticking-Out-of-My-Stomach Look? 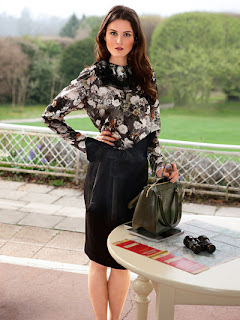 Maybe everyone loved the Pippa Middleton wedding dress knock-off earlier this year, so now we get the Kate Middleton Most Boring Dress. Lovely, but fashion? You could date Prince Philip in this dress. 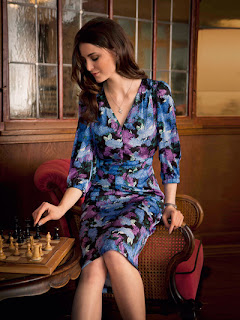 And now the irkiest (is that a word?) collection of the issue. Just because you put a flower in somebody's hair does not make it Asian. Burda did a fabulous Asian issue in February from which many of us made the cheongsam knit dress, (most recently in stunning red here: Cyberdaze in a red version of Burda's February 117) Those were genuine Asian silhouettes. They've also included a marvelous kimono in an earlier collection of languid, lacy looks which I've detailed in three "how-to" posts earlier.
But a tie-blouse and a sheath aren't Asian enough to warrant this treatment.
I might make the blouse. It's sweet. But that won't make it Asian. 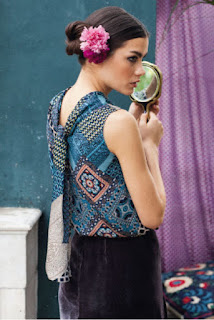 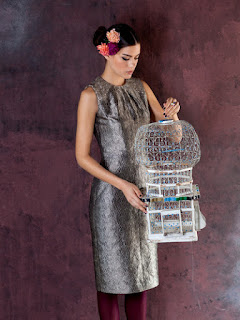