The Great British Sewing Bee— two farewells, rather than one. 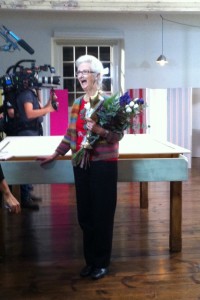 Bravo for the winner of BBC2's The Great British Sewing Bee (last episode), in which Ann Rowley won the trophy and Sandra and Lauren came in close on her heels.

What touched me about the production were the programming elements that felt less ruthless than some of the moments in earlier episodes, and more embracing: a moment with the families of each sewer, that charming last sequence, when the surprise fitting models were members of each contestant's own family—now there's a realistic scenario!—and the finale in which all the original contestants returned to congratulate the winners and celebrate the show itself.

It felt more like the sewing world I know.

Well done to all, and a special shout-out to the sewing adviser, Claire-Louise Hardy of The Thrifty Stitcher whose backstage notes are a delightful resource for those GBSB addicts looking for more info on the patterns and techniques employed on the show. I, for one, have already used her video on sewing a fly zipper while finishing my floral pants for the summer.

Meanwhile, a sad farewell to fellow blogger Karin of Sew Here We Go Again! who wants more time for family. But we can still catch up with her sewing on Pattern Review.com, so it's not totally sayonara. I will miss her generous comments, though. Big hug, Karin.
Posted by Inkstain at 02:30