As the late, great Alan Rickman says in the comic film, Galaxy Quest, 'Never Give Up, Never Surrender!'

Remember the 'Epic Fail' blue linen jumpsuit on which I spent so much money for high-quality imported linen, only to end up with a baggy, crumply mess I wore only once, to the Verbier Music Festival when our Fiddlerkid was performing? (below) The Burda Style pattern featured a very long torso and the design was suitable only to Burda's choice of a satiny, drapey fabric that settled discreetly over the elasticated waist. My quality linen puffed out too much.

The waste of such good fabric hurt my heart. I finally bit the bullet and ripped out the waist seam and made a very serviceable work shirt and pair of pull-on pants that I've been actually getting wear out of all summer. Here's my new rescue version, cut in half. 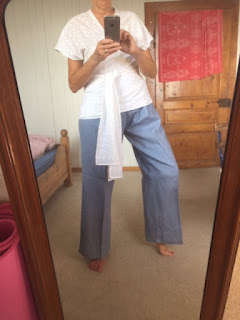 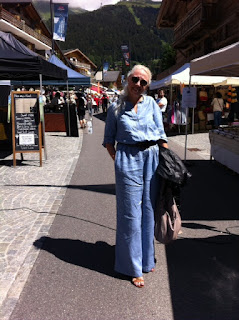 The new white wrap shirt above is a second version of the Burda Easy Japanese workshirt I already blogged, below, (this time without the sleeves.) The white version is a direct copy of the model featured on the cover of that edition of Burda Easy, 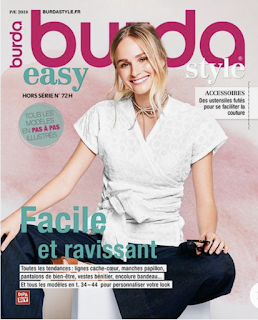 which is why I fell in love with the pattern in the first place. Because of its tight wrap effect at the waist, I can get away with a pretty unexciting elasticated waist from the jumpsuit as it was. 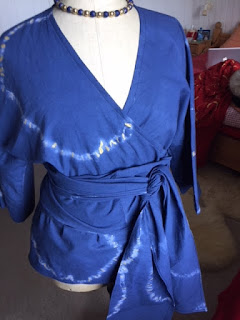 The blue ruffled shirt below also covers the 'sin' of the elasticated waistband and is Burda Style 3-2019-111, also blogged before.
My revised, rescued linen shirt goes well with my hardworking jean skirt constructed as learned in Berkeley in 1970. (Vaccuum not included.) Here the excess fabric that ruined the drape of the jumpsuit bodice turned out to give me enough shirttail to tuck it into a belted bottom.
SUCCESS! 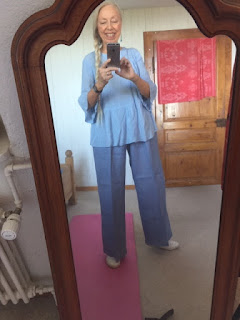 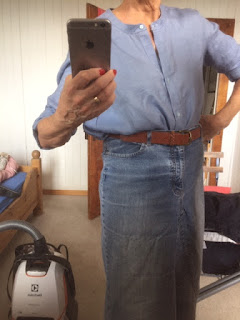