Safari Shirt-Vest Burda 5-2010-129 Finished! and invitation to a free concert at the RAM, London

I guess this is my obligatory safari item for 2014, and Lord knows, I have a lot of safari clothes, but it's such a dependable look for me that I've finally scratched my longtime itch to make this Burda cover model from a favorite safari issue years ago. This is my third garment from one theme in a single issue—definitely a sign that they were hitting the mark for me.

Normally, I don't look good in the modified halter-style cut-in sleeve as it only emphasizes my pear-shape, but this particular design is very flattering because of the fitted waist and modified peplum.

I used only recycled khakis, buttons, and zip, so the entire garment cost me nothing but time. There were a few little squeaks due to limiting myself to recycled fabric, including having to use a slighter darker trouser for the inner facing and (having flubbed the cutting of the shorter the left side front band although I remembered to cut the right side long and pointed and the inner side shorter and straight, I forgot that the shorter end also needed a seam allowance added—my bad) I was forced to resort to a 'dirty fix.' This will never be visible except to you, my friends, below.

I am very happy with this, and if the UK weather is warm enough, I'll be wearing it on Wednesday to fly over to London. Why? Son T. is giving a MA violin concert open to the public on Thursday, May 29, at the Royal Academy of Music, Marylebone Street, at 1:45. If you're in in the mood for a FREE concert of Bach, Brahms, Englund and Vieuxtemps, please join us! (Doors to the Duke's Hall close around 1:30. Free seating.) 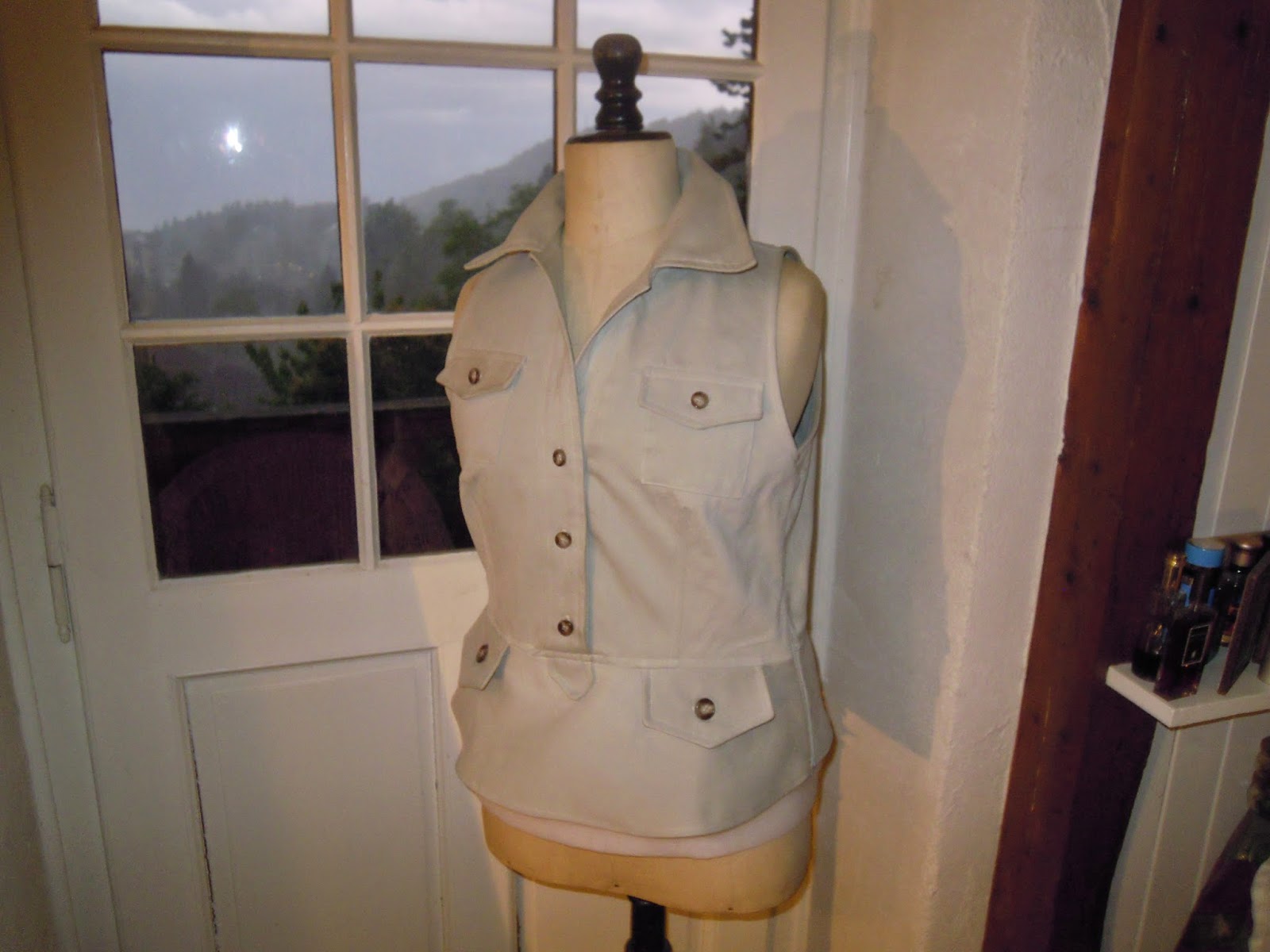 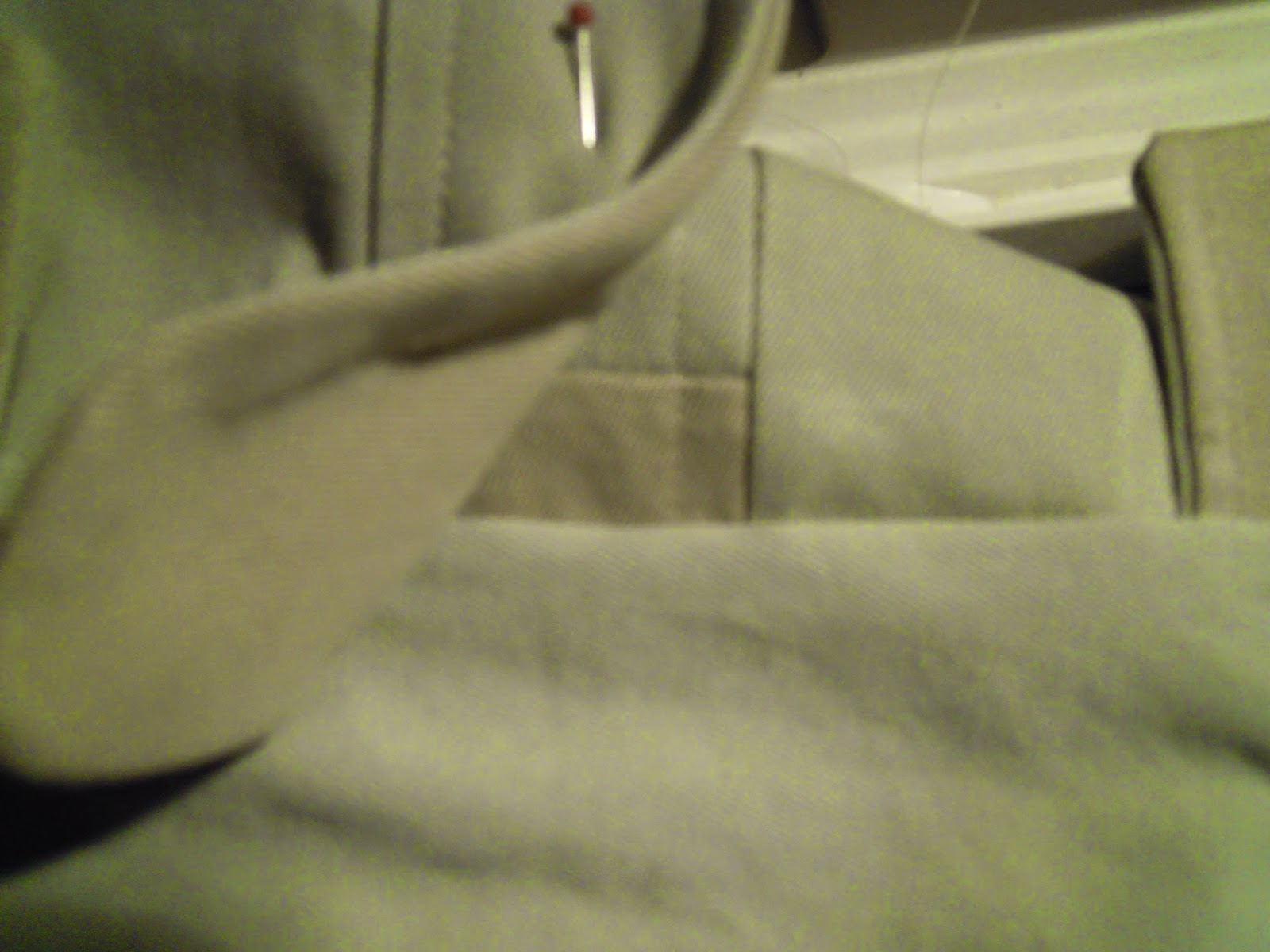 The Best Baby Sweater in the World by Elizabeth Zimmerman

I know. You didn't know I could knit, did you? You thought the only one who could knit was The Sewing Lawyer? Hah!  I did have a knitting passion in the 80's, when in my opinion, knitting really was high fashion and Vogue Knitting was one of the greatest magazines for crafts around. They actually sold it on every newstand in those days, even in Hong Kong! And I made some great sweaters that I still wear, by Donna Karan, Perry Ellis, Calvin Klein and other top designers.

But knitting for fashion no longer interests me, even though I live in a cold climate. A 'knitter's elbow' did me in after two Kaffe Fassett sweaters for the boys. Here I was with a growing family and I couldn't so much as lift a milk carton. One cortisone shot later, I'd sworn off major knitting projects.

On the other hand, when one of your friends is going to become a grandmother (a young one!) for the first time, it's a good occasion to pull out the old bag of needles. I'm zipping through my variation of the Vogue Knitting baby classic by Elizabeth Zimmerman, featured back in the 80's as the best sweater for newborns. It's also in the Knitters Almanac. This model expands for months, thanks to the extensible lace pattern which I modified by accident once and now stick to—just to be stubborn.

(Instead of doing stockinette stitch between the 'gull' rows, I use garter stitch. The result is less refined, totally chunky, and looks something like chain mail in yarn.)

As the child grows to six months, the lace stretches out and the pattern becomes more and more distinct. This is how it's supposed to look— 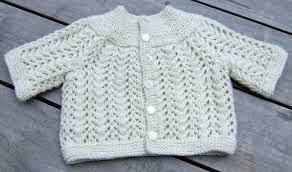 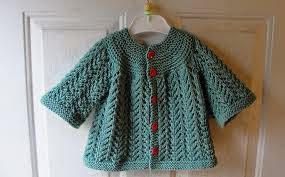 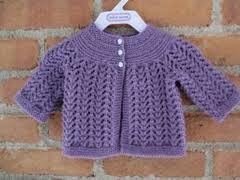 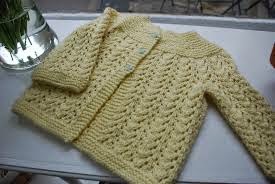 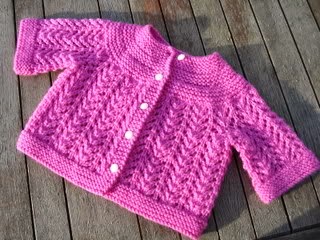 Mine (just below) isn't quite so polite, what with a very tweedy alpaca/wool yarn, but it will take on more refinement when we know whether it needs boy buttons or girl buttons later in the summer! 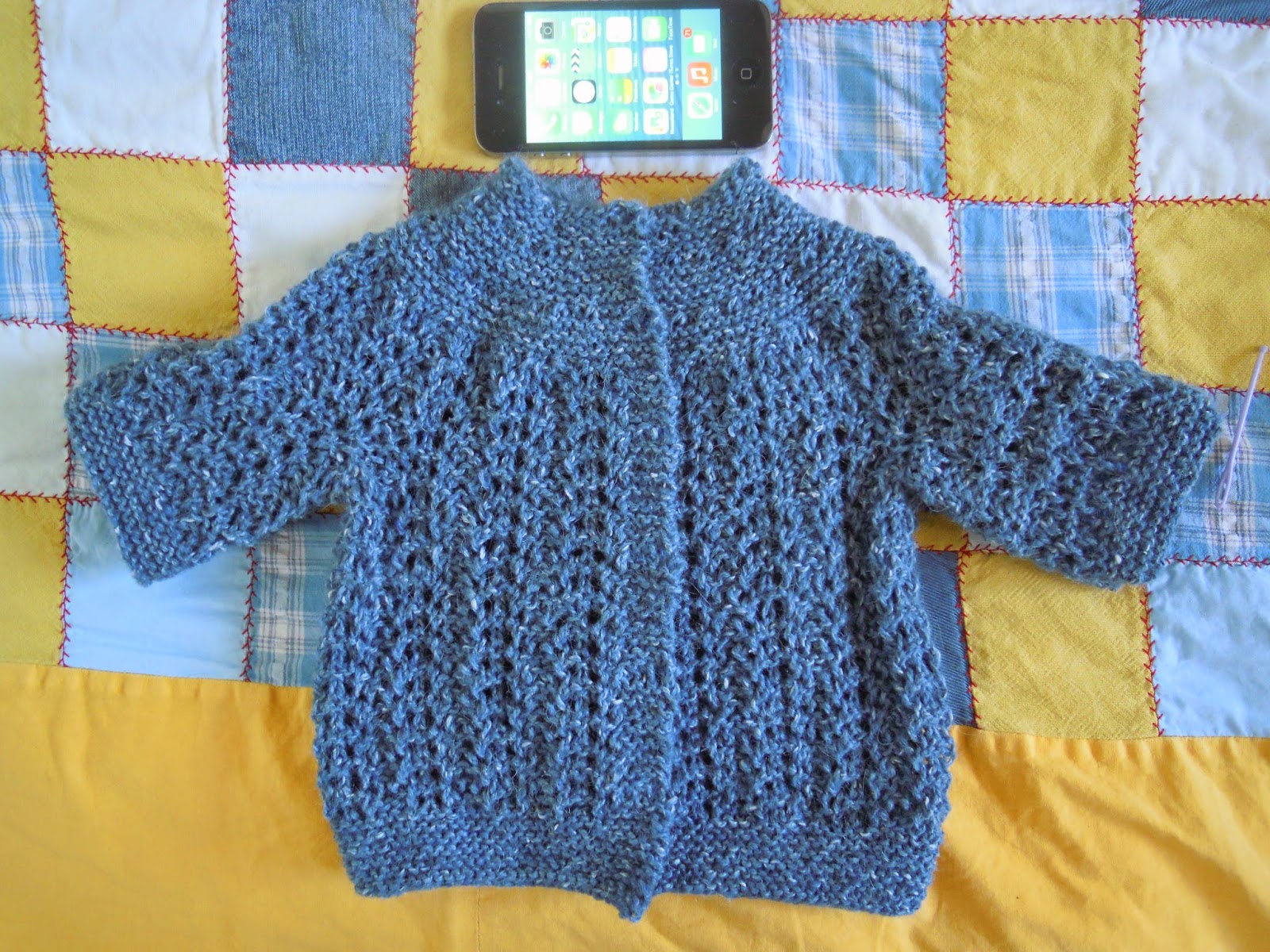 But I'm relieved to see somebody who was even more radical than me, and just ignored the lace pattern entirely, and went hog-wild with buttons instead! Lilac Baby, up top, skipped the bottoms below the yoke, too. 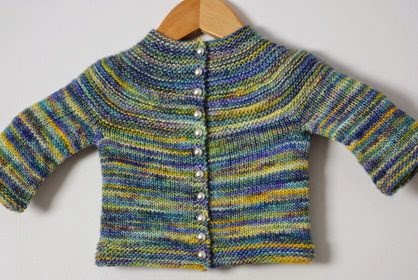 In principle, you could do any kind of stitch pattern underneath the yoke. It takes about two-three days to knit up, even for a rusty knitter like myself. I had a long car ride planned to attend an 80th birthday party in another party of the country, and got most of the first half done during those hours, even though I had to refresh a lot of basic skills and actually had to start three times over. Not a bad thing in principle, and perhaps a reason to check and see if I can still rollerblade, play Grieg on the piano and do a respectable backstroke. (Sort of a week-long retreat of time-travel to see what happened to the Me of twenty-five years ago.)

Next up, another reclamation project from two pairs of chinos found unwearably frayed around the edges and left in forgotten closets upstairs, cut up, 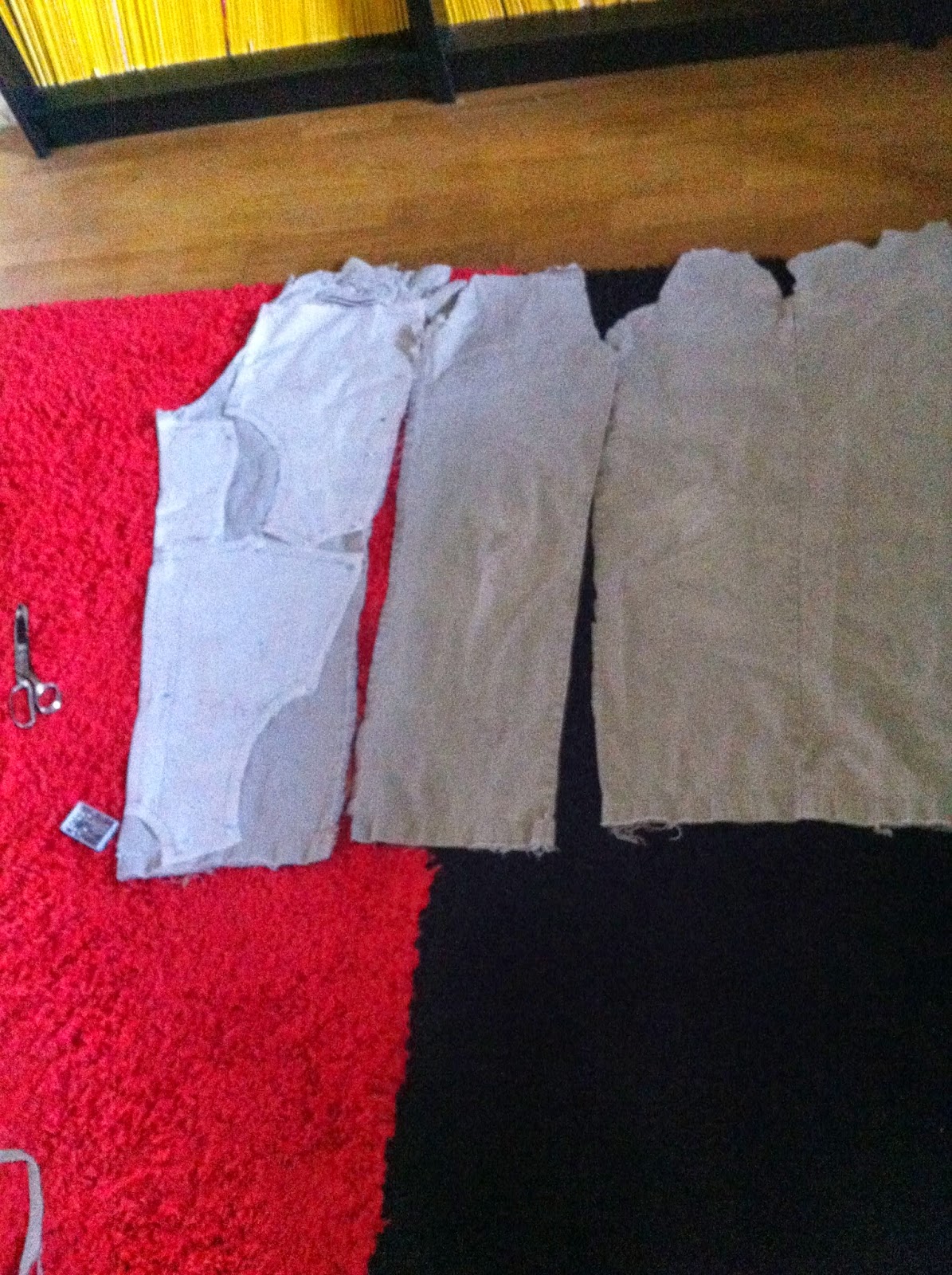 and re-pieced for this, now in progress. 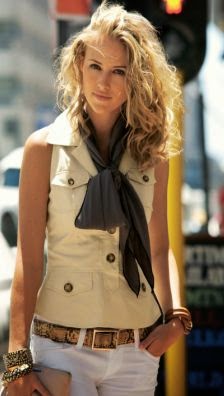 Posted by Inkstain at 06:18 No comments:

A Humble Muslin of Burda Wrap Blouse 04-2014-115 goes "Celine" and some tips on avoiding problems!

I still hope  to make a classy linen version of the wrap-around blouse that is selling out on the Burda US website, and once I had cut out a muslin in IKEA cotton to check the fit and length, I suddenly thought, why not go "Celine"? By which I mean, this, and this: 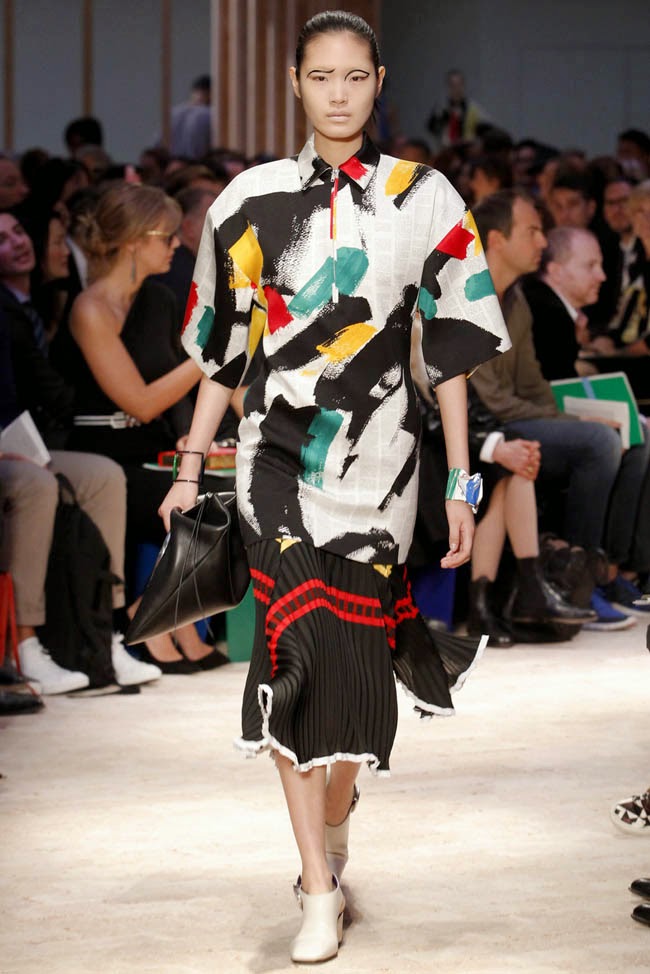 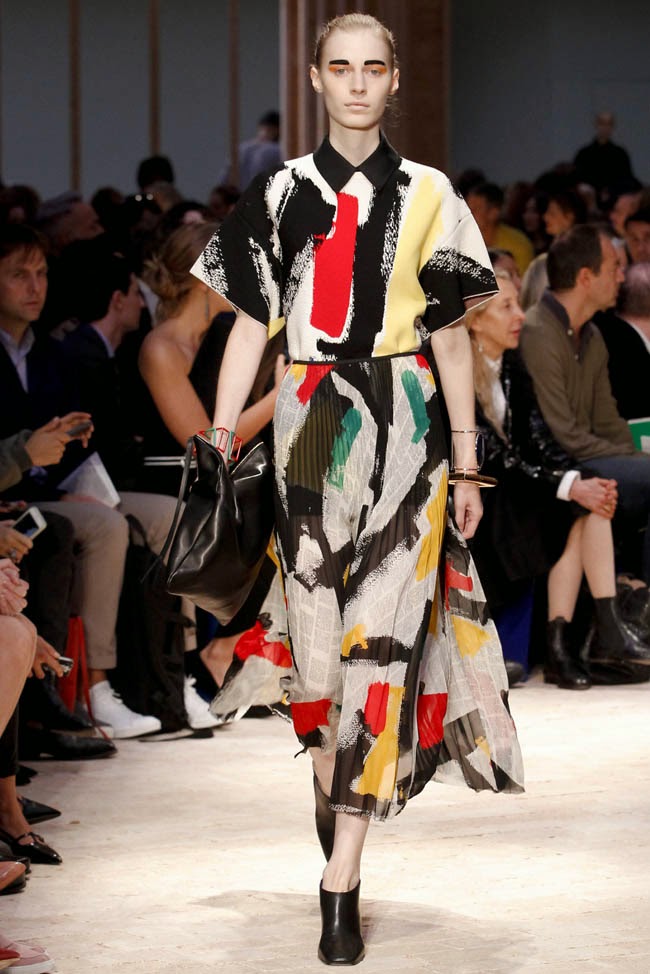 So here in progress, is my wearable muslin of the blouse, waiting to be stitched up and maybe even worn over the Burda black cotton "sharkfin" skirt which has a very high waist. 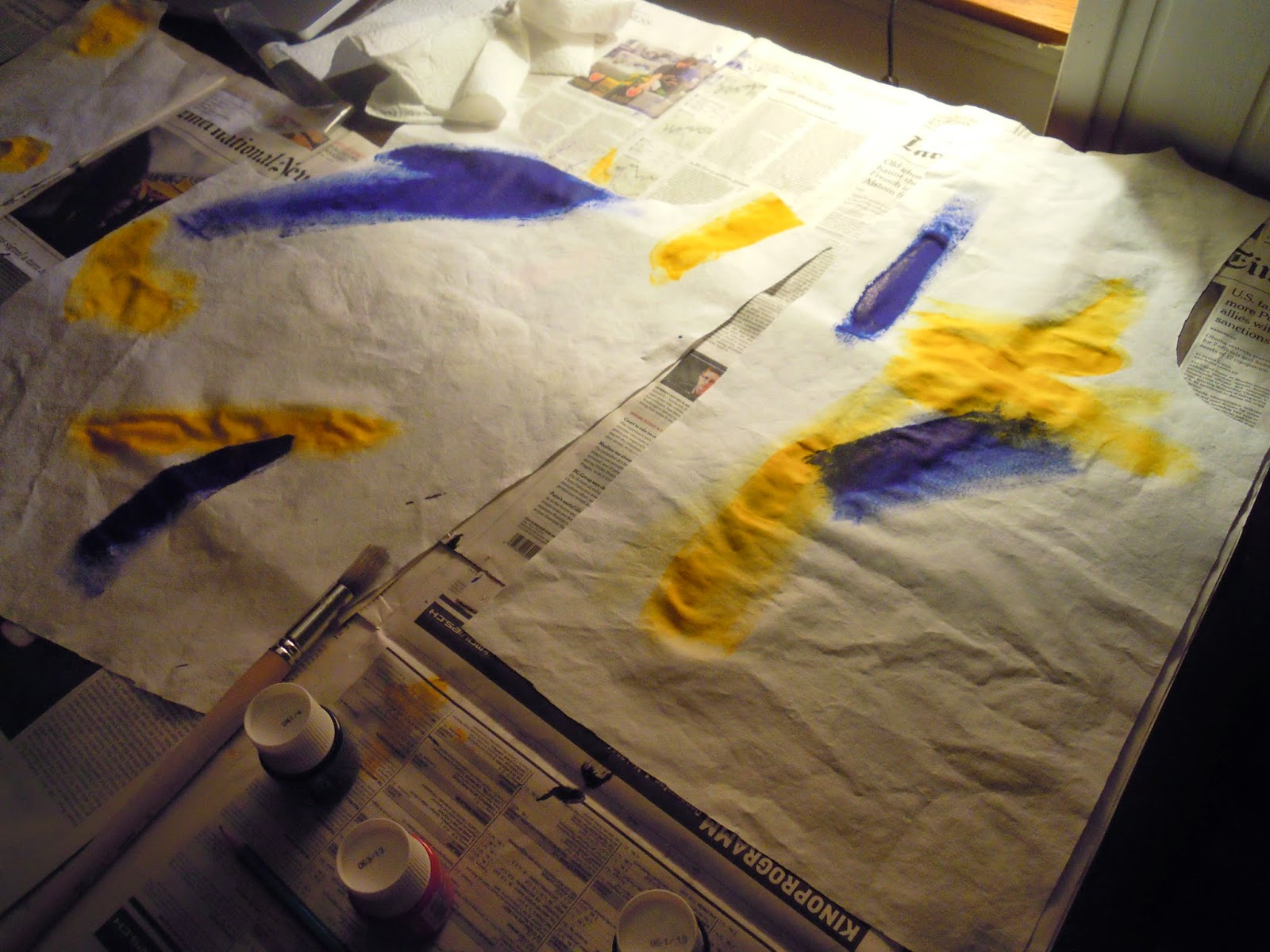 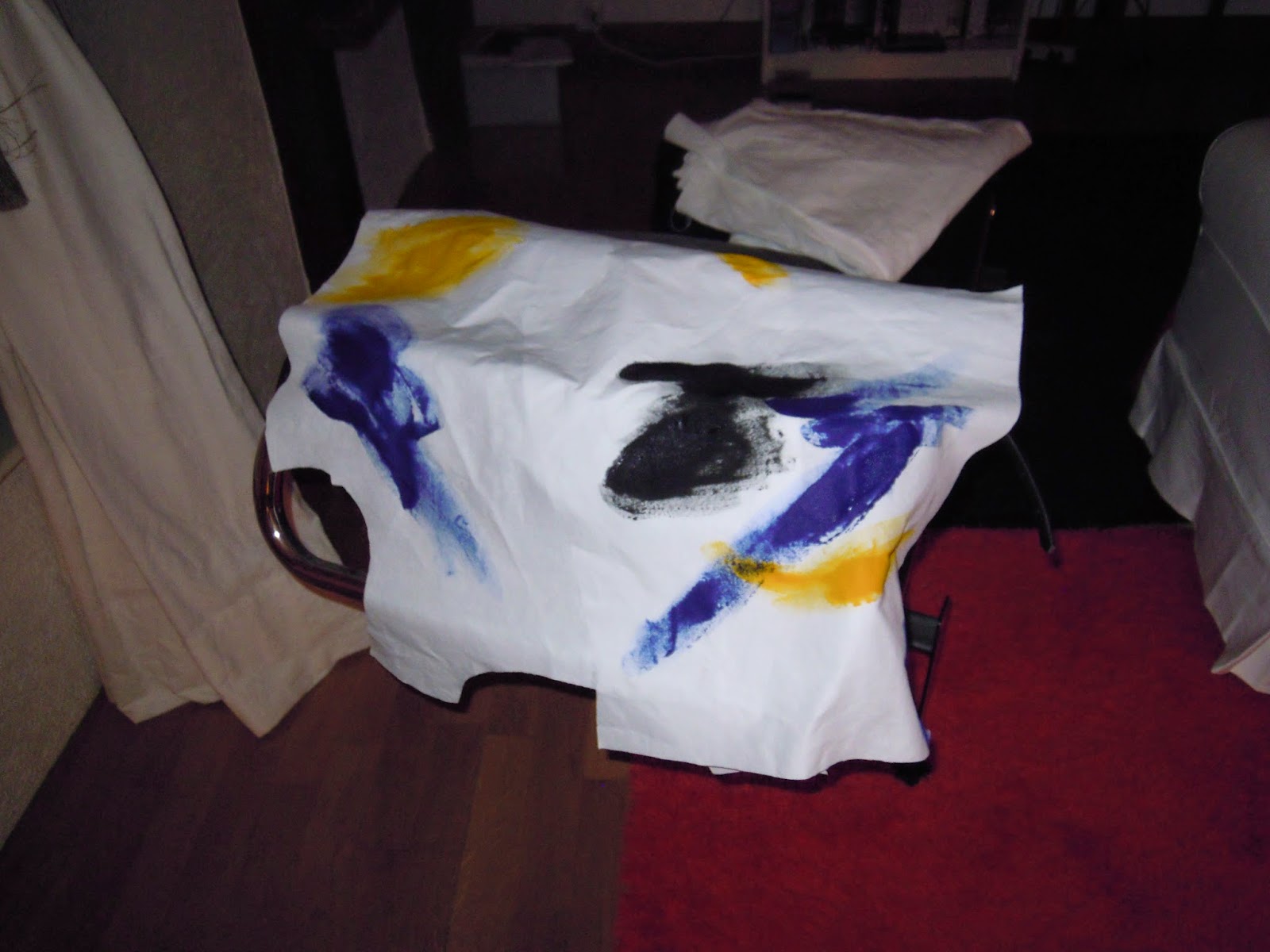 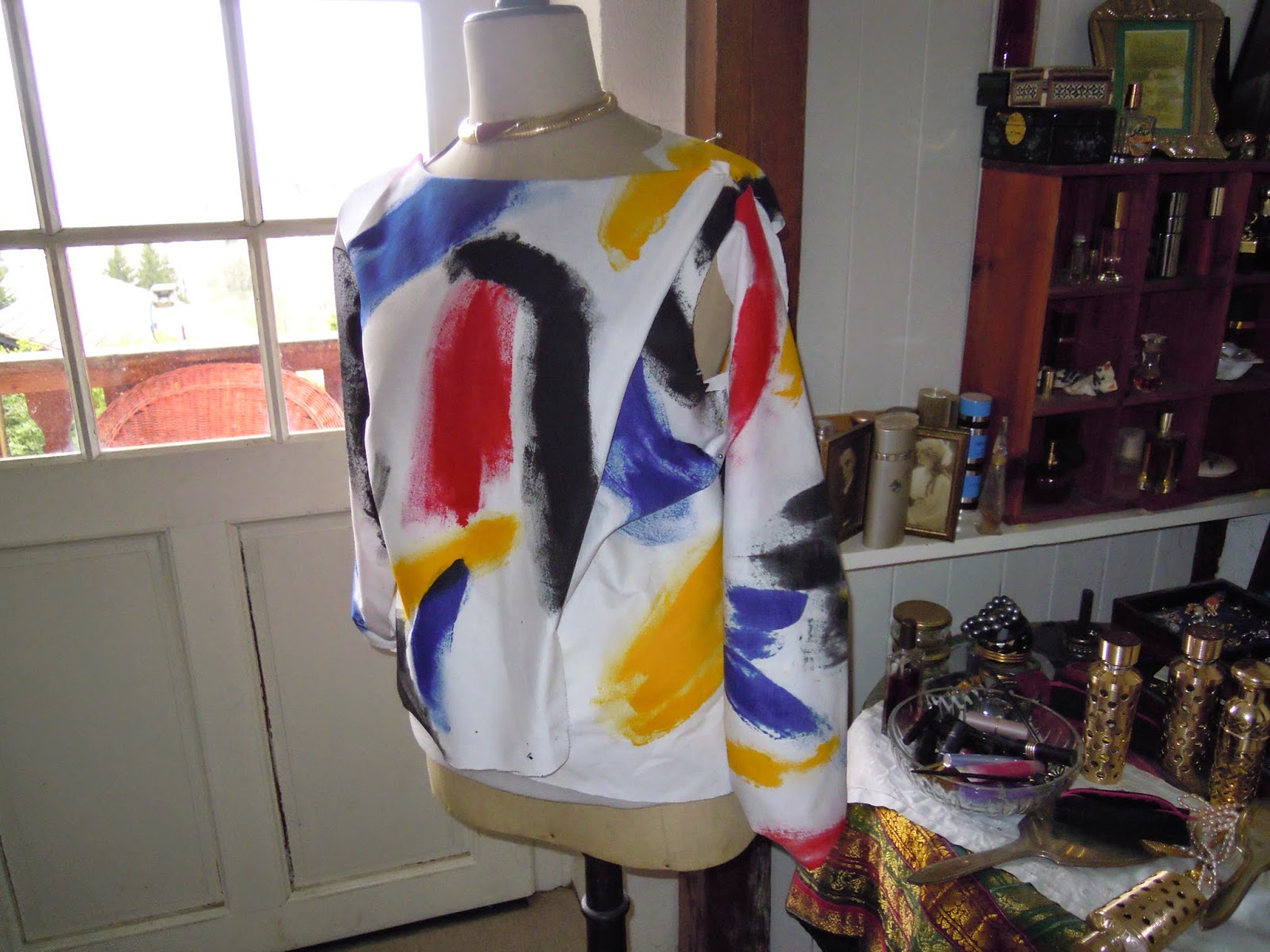 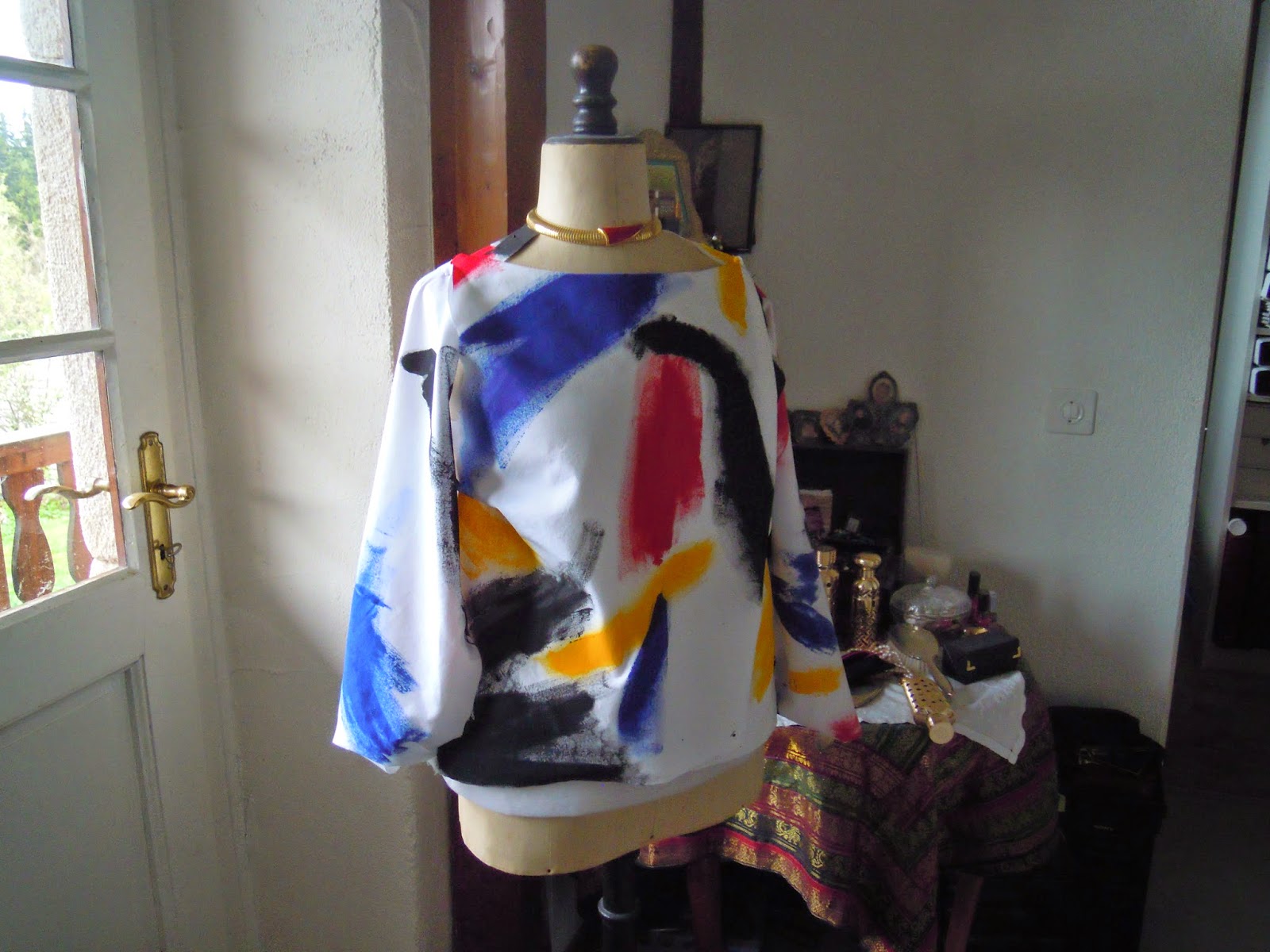 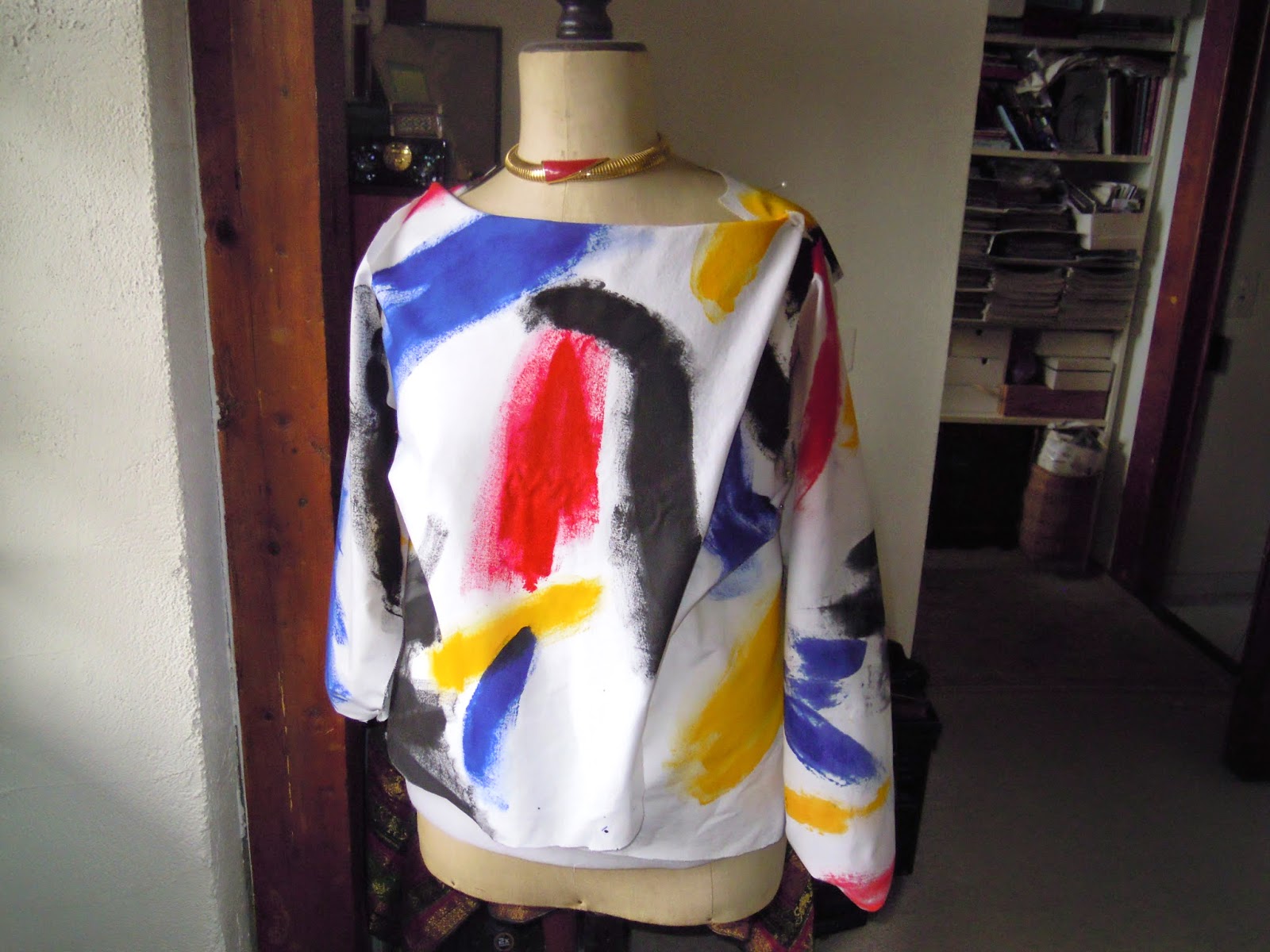 Yes, I know I still have to sew this thing up, 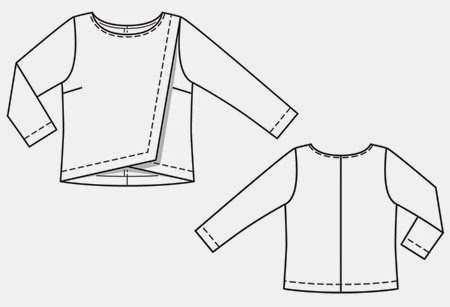 but I couldn't resist leaving it on my fitting stand just to wake up in an art gallery this morning.

TIPS: I'm glad I'm doing a muslin of this on IKEA cotton and not on an expensive silk. As simple as this design is, there are already a few hiccoughs I'm encountering. One is that I wasn't clear on whether the whole hem of the shirt, front side as well as bottom was supposed to be 4 cm so I used a 1.5 cm seam surplus on the slanted side and a 4 cm on the bottoms of all sides. As it turns out I need the 4cm to give me just a 1.5 hem turned in .5 and then again 1 cm. That way I've got a finished look, but a longer shirt. I suspect I was supposed to do 4 cm all the way around. (My French isn't perfect and I'm using the French edition of Burda.)

Second, make sure you don't catch the overlapped front into your shoulder seam at the side, but only at the top.

Third, the instructions tell you to do a mitred corner on both the front hanging angles. Watch OUT. If you do a standard mitred corner you're assuming a 90 degree angled corner and this has an oblique corner that you should baste and adjust so it lies flat once it's sewn and trimmed. Otherwise it pulls too tightly on the shirt hem.

UPDATE; Finished this in record time, so the rating in Burda is on the nose. All it needs is a press, because I test-washed the corner to see if it was colorfast. Notice how I color-matched the red stripe running off the shoulder and down the arm? 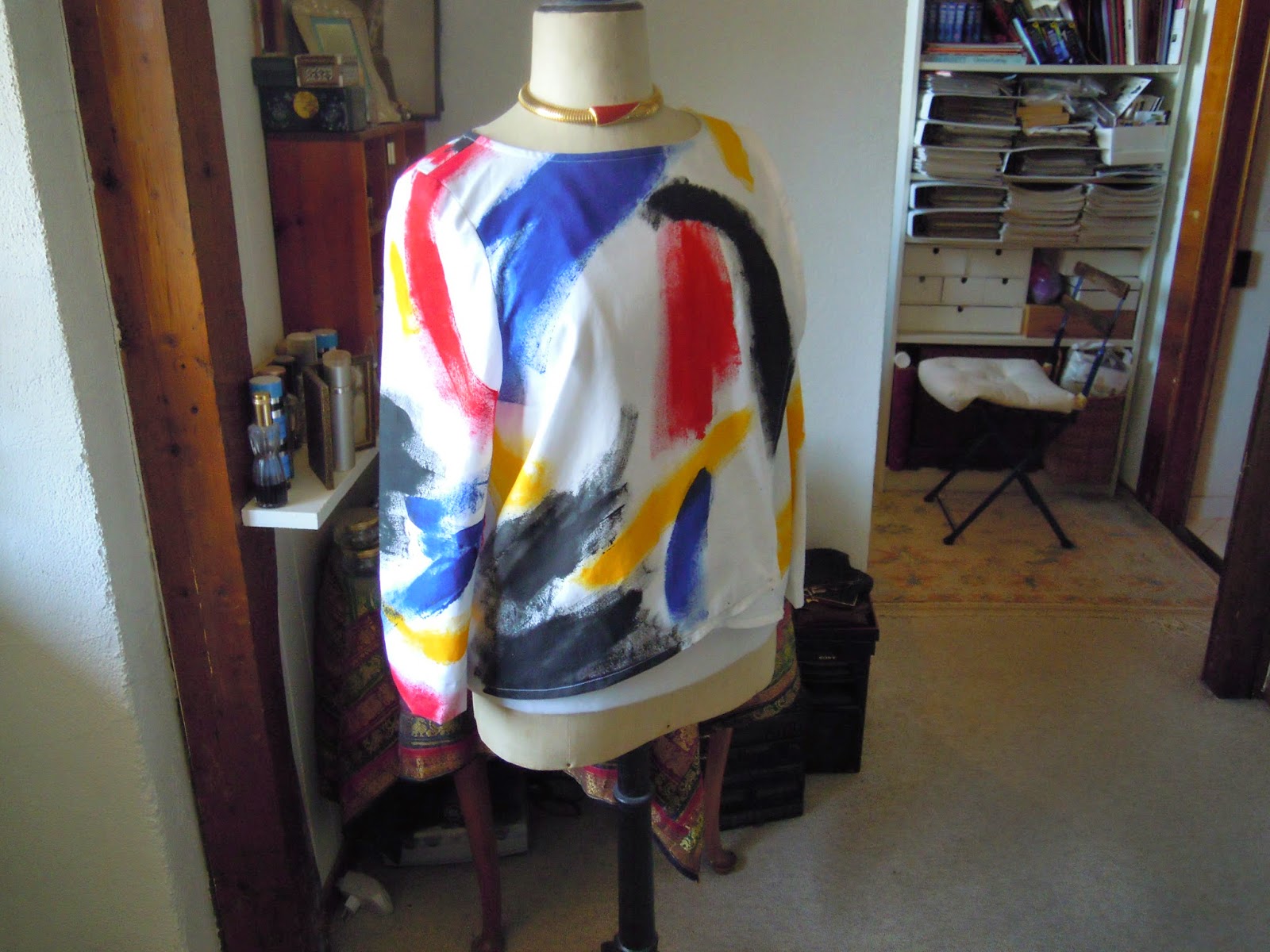 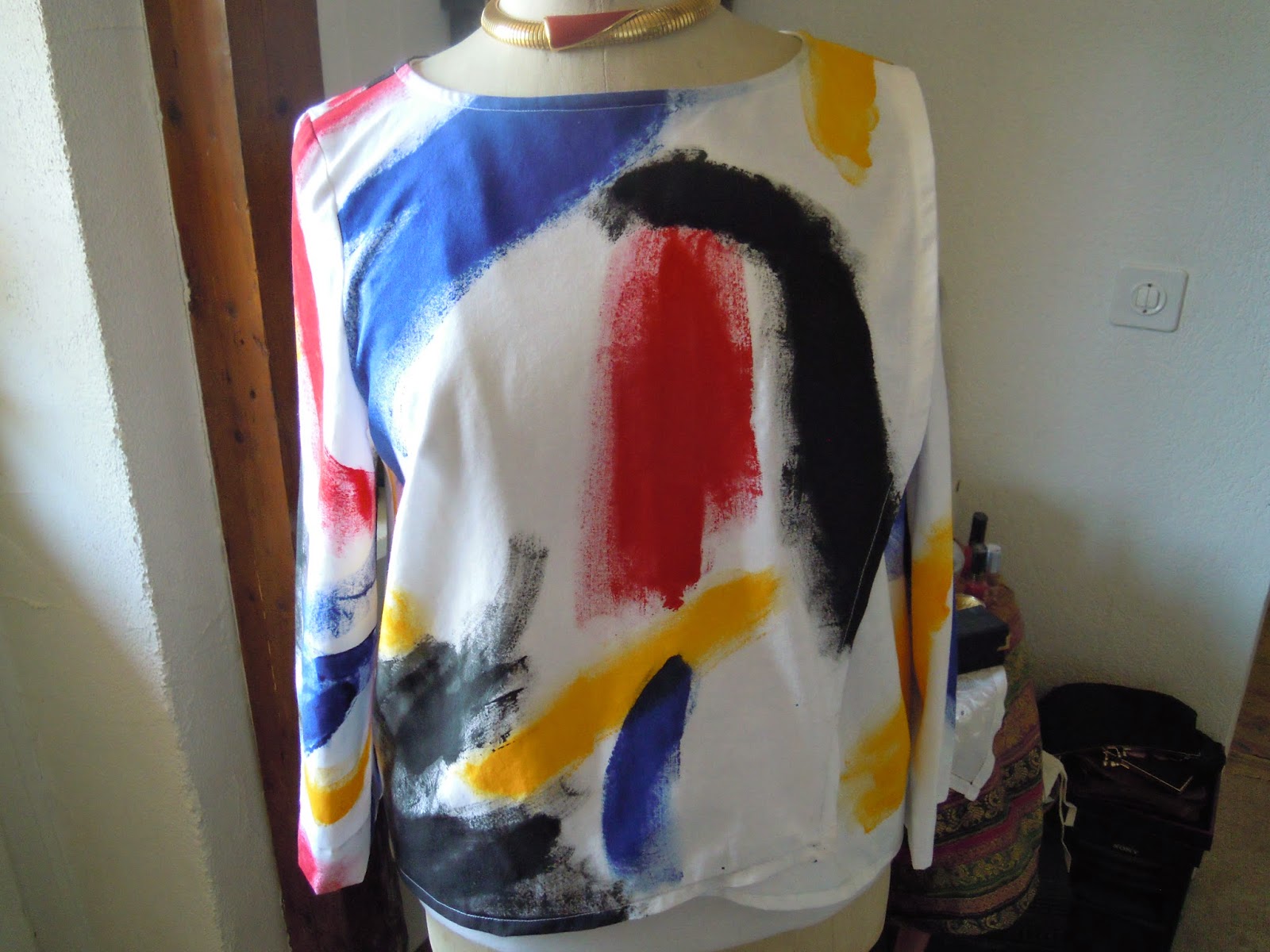