Oh the SHAME! Oh the mortification! CyberDaze has just cornered me with KINDNESS so that (clever girl!) she knows I'll get back to the sewing table if I have to live up to something called the Liebster Award!
The what?
I'll take it! Does it come in blue? With accessories?

Anyway, Thanks Cybe! Now I will sew. I feel lurved.
Posted by Inkstain at 04:07 2 comments:

Whew! I'm back after a hard January of work. All e-books had to be re-edited (because gremlins in a scanning machine resulted in unwanted glitches) and uploaded again, so if you have any faulty versions in your devices, please re-upload from Amazon or Smashwords for free.

Then the Geneva Writers' Conference 2012 required weeks of research and preparation for the New Media Panel, so I confess that sewing went by the board. I was going to wear my blue kimono for the opening night dinner, but it was just so freezing a trip between my mountain fastness and Webster College that I went with turtlenecks and tights under the Vogue camel cashmere coat and a rabbit fur muffler from my daughter.

Now I'm working with a local director for a workshop production of my play, "Dear Mr. Rogge," which we're converting from the radio version which won a BBC International Playwriting Contest "commendation" in 2009 to a "reading version." I think playwrights wear black so it's going to be Vogue OOP black knit pants with a OOP Ralph Lauren black velvet jacket.

"Dear Mr. Rogge"is based on the true story of He Depu, a jailed Chinese writer defying solitary confinement to directly refute IOC President Jacques Rogge's assertion that the Beijing Olympics were nothing but a "catalyst for good." The curtain, (if there is one!) goes up in Geneva next Tuesday night.

Back to the patiently-waiting synthetic fur for the Burda December fur coat, No. 116 which reminds me of a song about muskrat love. 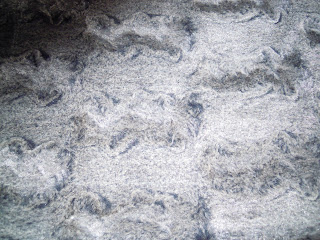 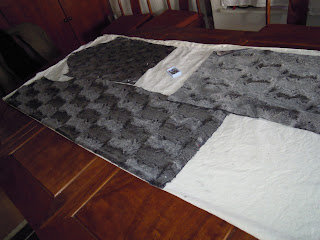 After unfolding it for cutting on Monday, it struck me as too flimsy for a coat. Some fake furs are too cottony and stiff, but the very silky "hand"of this one requires some hidden heft. So yesterday, I resigned myself to cutting out an interlining of IKEA muslin for the whole coat.

As you may recall, I interlined my camel cashmere coat and the result is that it fends off this unusually cold Swiss winter like a tank, but weighs a ton. Hence the hesitation to underline again. But when my husband tested the gray fur, he asked, "Maybe a dress?"Then added hopefully, "Or pyjamas?"

So here we go, in progress, above. Did I remember to say that cutting out fur is like redecorating your dining room in Early Cat Hair? Gray fuzz lies everywhere and is confusing our cat Frisbee no end!

p.s. So many of you reached this blog via the now-suspended, much-mourned LindsayT site, that may I ask you all to put me up on your blogroll directly? Many thanks!
Posted by Inkstain at 02:30 3 comments: