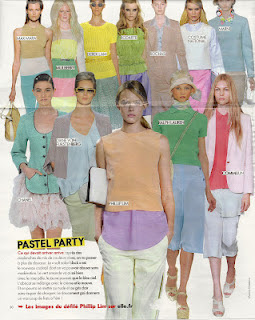 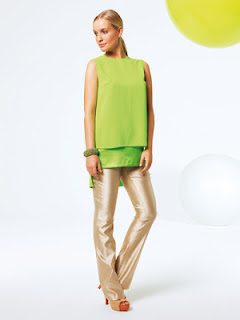 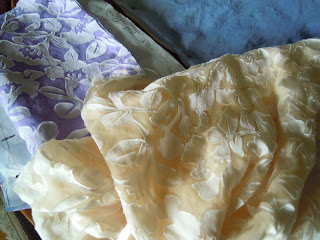 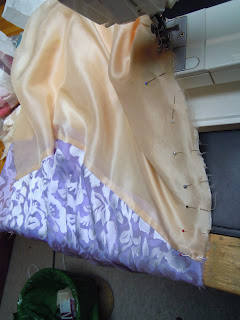 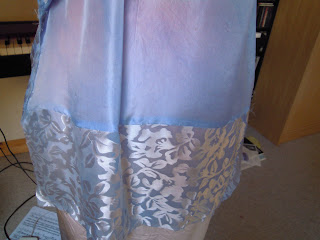 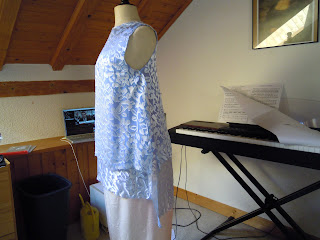 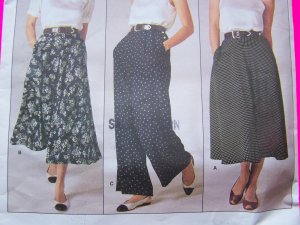 These 1986 Ralph Lauren Vogue Designer OOP 1723 palazzo pants (center photo) finally found their partner, but it took more than two decades! I sewed them up  in 1993, the summer after I had my third child, a daughter. I even used the same fabric as Ralph, a heavy silk crepe in black with cream polka dots, purchased in the garment district in Manhattan.
I wore them exactly once. Meanwhile, the "baby" is currently reading biology at University College London.
Why no traction for these?
Because I didn't have the right shoes, blouses, red lipstick and toenails, or retro hair to capture Ralph's Cap D'Antibes-South of France-Zelda and Scott mood. Wearing them with flats as shown by RL in the eighties didn't work for me. I had long straight hippie hair. And, alas, I was too short-waisted to wear them with a tucked-in top or a leotard. The balance was completely skewed.
I forgot about them.
Then two things happened. First, I lost my Burda black cotton "shark" skirt and had to turn out three closets and two garment cases in storage hoping to find it. The loss of a single garment threw me into an inexplicable obsession to find it in time for a trip to see another son graduate from Cambridge University at the end of June. More on those choices later. Like, uh, I didn't have anything else to wear? But this disappearance preoccupied me: I was like a maddened nineteenth-century English rector hunting down that last Roman coin for his collection.
In the process I eyeballed twenty-plus years worth of clothing and got a shocking overview of my accumulated stock of lovingly sewn but forgotten clothes.
Including these Ralph Laurens.
Second, the other day at Promod I saw the perfect Great Gatsby blouse on sale for 50% off. For 20 francs, what was wrong with this perfectly classic, Chanelesque "little darlink" on the sale rack? I washed and ironed it and as it turns out, there wasn't anything wrong with it. It was just waiting to be hooked up with the perfect palazzo pants and platform shoes.

It took twenty years for these two to find each other, but here's the lesson. Don't toss good clothes made with love out of good fabrics just because the era or accessories feel off. Don't forget your abandoned babies in the back closet/clothes box. Be ready to give them another think. Have faith, because as you build your wardrobe and find your style, things will start to hang together and deliver with consistency. And don't forsake the sales racks: a little mending or in this case, an under-appreciated item may find its perfect love near your sewing machine.
What goes around, comes around and sometimes a good garment delivers—after a few decades' rethink.
p.s. The hunt exhausted, I called UCL. Indeed, the Burda shark skirt, that useful black cotton number, was in the back of her closet. 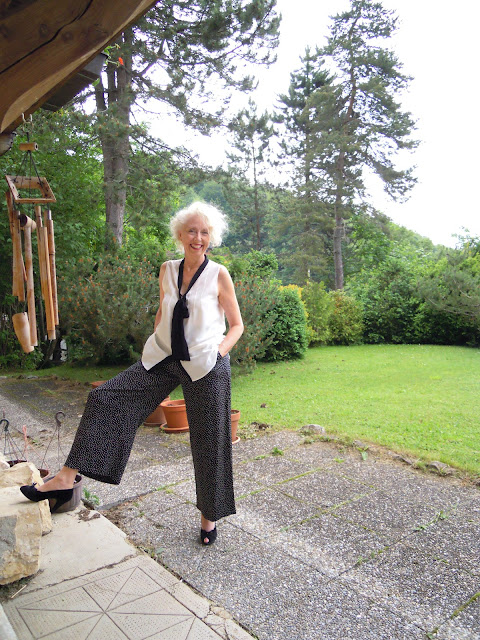 Here's a photo of the outfit last night before attending an unbelievable private concert in Geneva by the brilliant, beautiful and talented Eldbjorg Hemsing.
Posted by Inkstain at 03:27 3 comments: