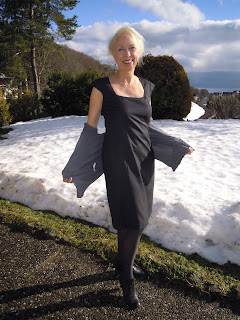 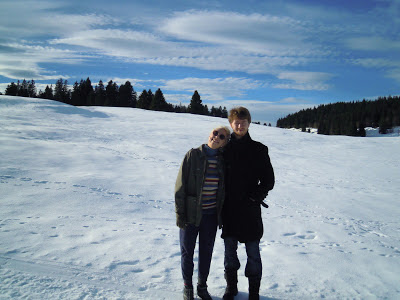 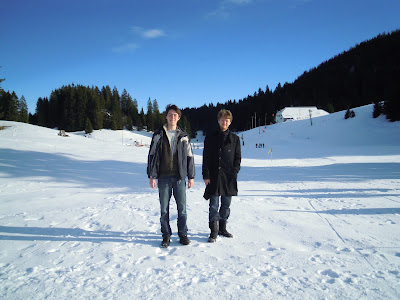 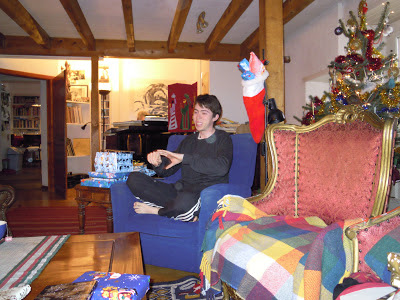 Funny to watch how some designs kind of "melt down" from the designer version to the bare basics for beginning sewists: The fashionistas all made this Donna Karan knit dress, with its lovely fitted three-piece back, right off the bat, when it appeared some years ago: 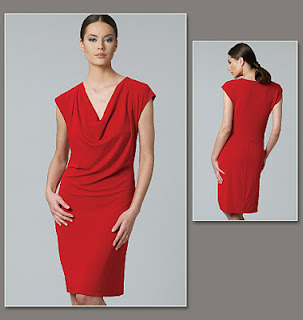 Burda made it a one-day project by eliminating the three-piece back half. 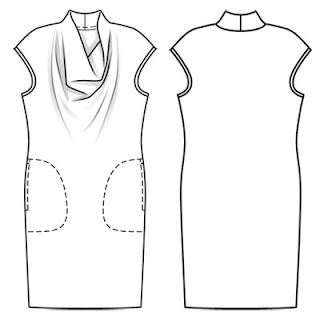 And Burda now says, you can get something like that cowlneck dress in ONE HOUR by sewing this version and adding a belt to pull it in.

Last month, Burda issued an out-of-series special, called The Classics, based very loosely on a Chanel look, and I nabbed it with high hopes. Unfortunately, I find the styles just a tad clunky and boxy, as if they took everything I hoped for and stripped the designs down one notch too far. It's not labelled "Easy," so it's not part of that series, but still, the items look under-designed. Check out the whole magazine, by clicking here: Burda Classic Collection 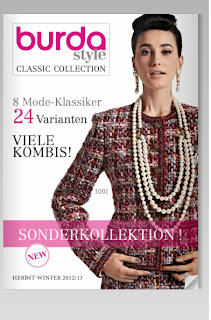 This issue would be a great start for people who like to draft their own Frankenpatterns, need a work wardrobe that doesn't scream 'trend-slave,' or for a young sewist who wants to build her pattern library with some fundamentals she could play with.
But some of the styling relies too much on judicious accessorizing.

As I was just blogging about the option in the Style archives for 'shovel-neck' sheaths, (and I ignored many more nice designs for Plus sewists,) here's the Classic offering, which gives us a fitting seam, Empire-style, under the bosom and two darts, as well as three sleeve options. As you can see, it is a classic design, lacking the little edge that brings these dresses closer to the Galaxy look. 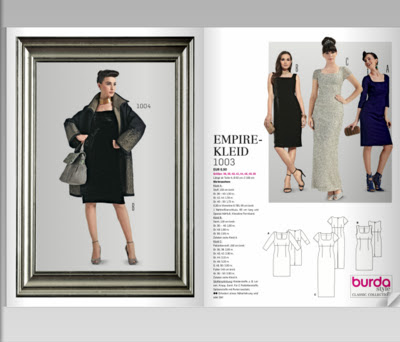 
A bit of sewing was very relaxing over the last two weekends. 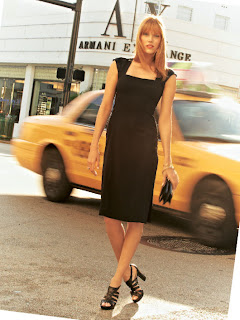 I've finally finished the red knit cowl-necked dress, (without a zipper, it's  as simple to sew as a T-shirt) and will blog about it once I get up a photo (when it stops snowing!)

Meanwhile, I had a remnant of pin-striped wool/mix of only just over one metre (150cm wide) that I thought would make a good pencil skirt long ago. But it's been sitting alone in my sewing box (I don't really keep a stash) for two years-plus. I finally  decided to take it out and use it.

I realized that a pencil skirt just wasn't enough motivation for me. Then, I thought of my daughter's "shovel-neck" sheath dresses, made twice; once in underlined lace and the other in a high-tech pleather and lined. Both were hits with her, but were so short that, of course, I could have made either version in a metre or less.

Could I squeeze a sheath for a grown-up out of so little fabric?

I looked at two designs, both from Burda. Although they are very similar, and both are designs that offer ample seaming for a nice fit, notice that the pieces of the second front give you more leeway in squeezing the most out of a short length of fabric than the awkwardly-shaped front of the first dress cut on the fold. I think I would have preferred the more generous sleeve of the first over the second, but I only noticed this too late. (I didn't sew the sleeves for the daughter's two dresses.)

This is one of the reasons I like the Burda Style magazines. People complain that they repeat themselves, but in fact, the Burda people tweak and vary hot designs to give you variations to suit your materials and desired "feel." I'm going to blog in my next post about a third shovel-neck sheath offered in the Burda Classic Collection magazine of November.


Here are the technical designs for the pattern used for daughter's sheaths, model 115 from October 09, and below that, the model from July 2011 I settled on, as photographed above, for the pin-striped remnant dress. I think of both as the sewist's quickie take on a fancy Galaxy dress, so popular years ago. 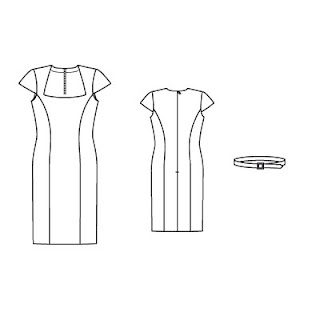 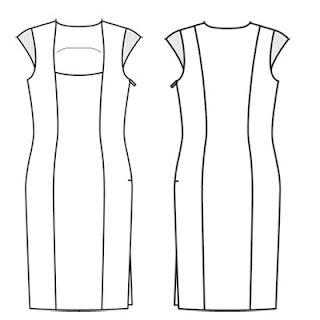 I made a couple of simple changes to this dress. First I added a burgundy satin lining, (also bought as a cheap remnant of one metre) underneath the inner front facing and substituting for the upper back facing. I omitted the interfacing on the sleeves as I didn't want wings, just sleeves, and as I had three layers rather than two at the neckline, didn't interface that either. 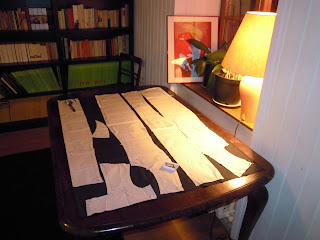 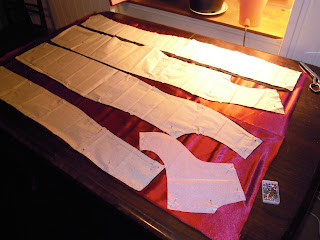 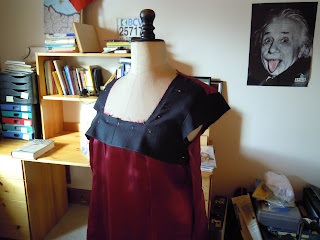 Most important, I wanted more pieces (and more flexibility) for an economical cutting layout. So I inserted the zipper into the middle of the center back, adding a seam  where otherwise I would have been "cutting on the fold."

I used Nancy's technique for sewing the lining directly onto a sheath dress, stitching the neckline to the facing+lining and then sewing the raw edges of the outer sleeves along with the lower sleeve opening in one go, as if the sleeves were simply extensions on a sleeveless dress. I'll confess my corners on the dress neckline were a bit wonky, as it was difficult to align the dress seaming to a facing that had no seaming. (Note that to squeeze the facing out of my metre of fabric, I couldn't get it up to the fold. So I added a center seam. Next time, I'd just cut a lining in the color of the outer fabric with the same seaming as the dress pieces and discard the facing piece altogether.

I also shifted the walking vent to my new center back, from the side vent shown above.
I always prefer a back zipper construction to a side zipper placement because sewing the side seams absolutely last before hemming means that you can pop on the dress at the end of construction and simply mark chalk along where the side seams will give you a glove-like fit. (If the zipper were in place on one side, you wouldn't have that kind of symmetrical fitting flexibility.)

As I say, photos of the two finished dresses to come.