A 'Vintage' Duffel Coat in a Weekend, Vogue 2571, Great British Sewing Bee, Season 2 Episode 6, Up at last for free

This week the Great British Sewing Bee Episode 6 gave the contestants a coat challenge. (btw, I think Heather should now get her own show putting that horrible Katie Hopkins six feet under. Heather is a hoot.)

Normally sewing a coat is a very big deal and the vintage twist in this episode added another layer of complication and interest to the task.  (They got to cut out their pieces at home, at least.)

Meanwhile, sewing a coat can be easy peasy if you choose a simple design. I did this one in a weekend and I suppose it sort of qualifies as 'vintage.' This 2571 Vogue Five Easy Pieces wardrobe pattern (sadly OOP, but there is at least ONE for sale on Etsy here; Five Easy Pieces Vogue 2571 and there are many others out there along the same lines) was just the right thing for a quickie duffel coat that is amazingly versatile. Not only is it easy to sew, with in-seam pockets, dropped shoulder seam for the armholes and another for the hood, but its finishing is simply a fold-over binding that edges the two coats into one. No lining or interfacing are needed for structure, given hefty enough outer fabrics. There is no collar, as the hood is seamed straight to the body.

It's a reversible miracle, belying the assumption that you can't get a sturdy coat without a lot of interfacing, finishing, and other kinds of tailoring faff. The hardest part is doing two sets of buttons and fastenings through doubled thick coating.

Here it is, last weekend, in camel wool and toggles with jeans and turtleneck, taking a walk in the snowfields above our farmhouse,  The wool combined with the ready-quilted fabric meant that no interfacing was required and this baby is WARM! 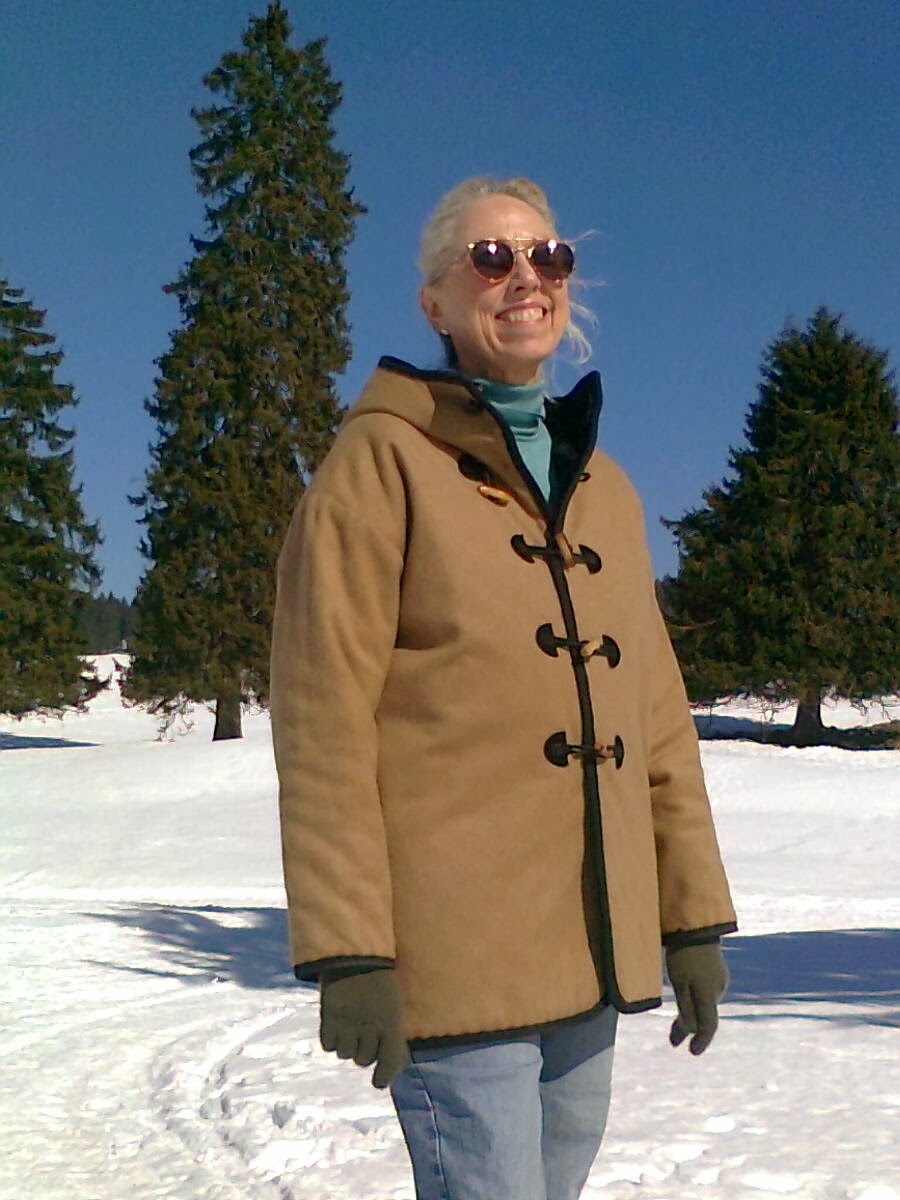 And here is its dressier incarnation this week taking an English houseguest through her 'local paces' in its more 'Chanel'-ly incarnation with the pre-quilted black cotton velvet turned to the outside, after a fresh layer of spring snowfall.

Same coat, two looks, more time in the snow than at the sewing machine. 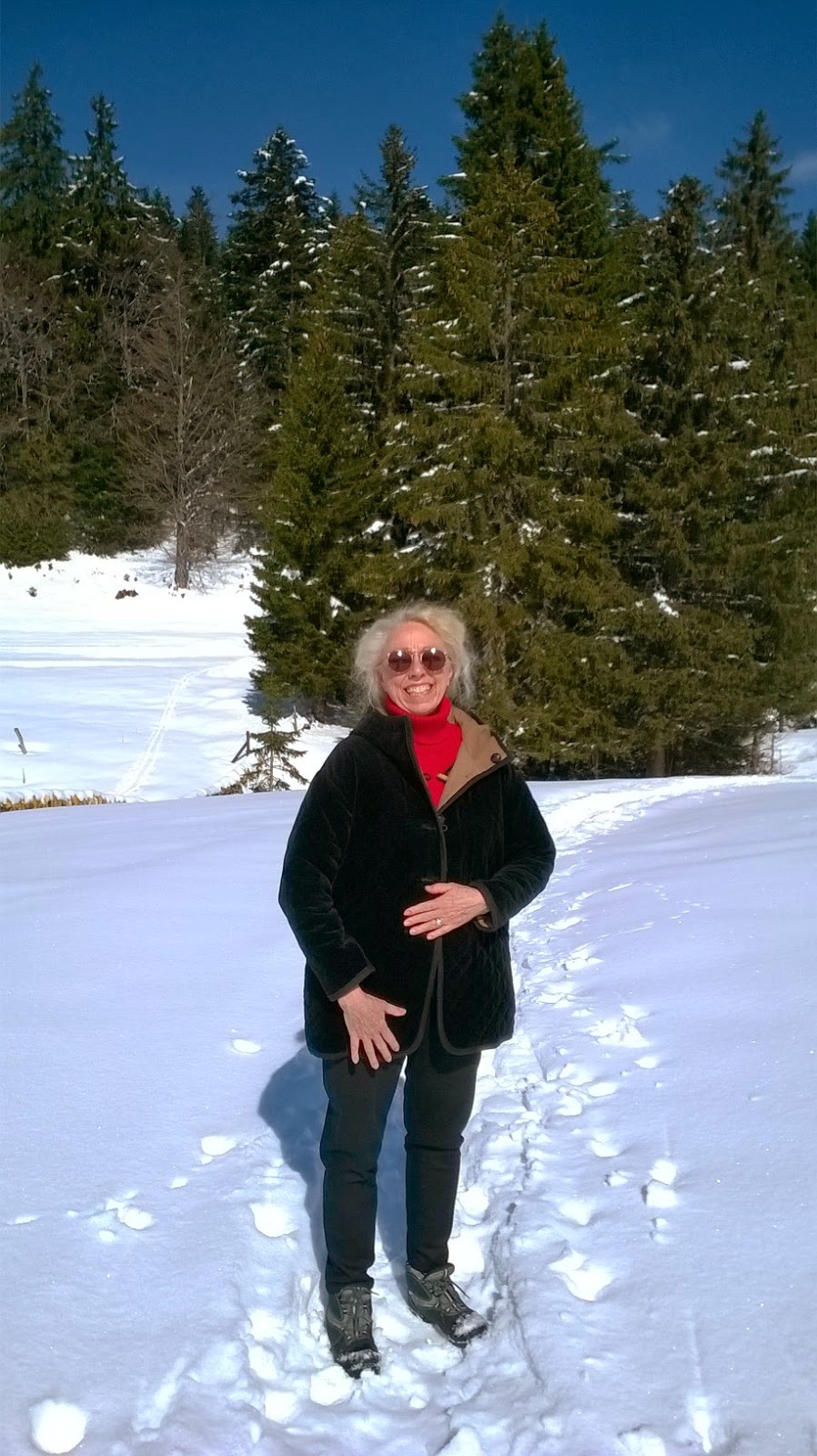 Here's how Vogue styled their version in tweed and pre-quilted fabric. 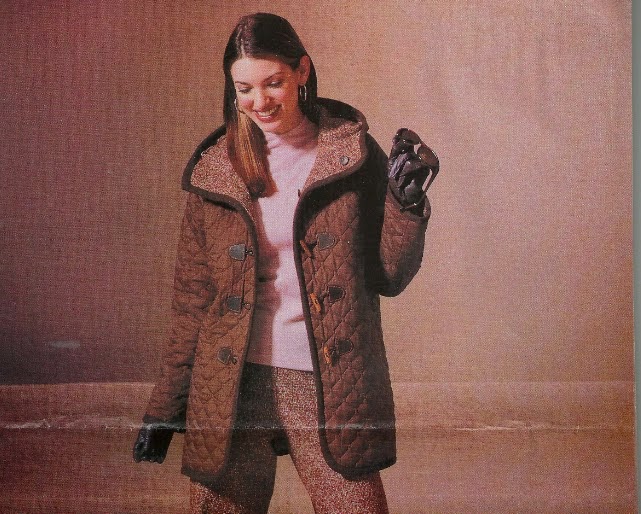 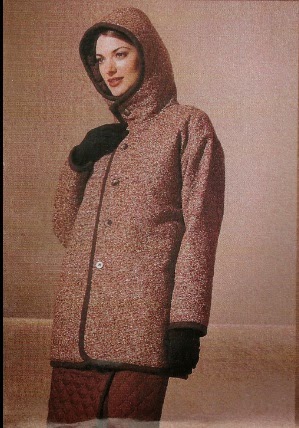 They finally posted the links for free to Episode 6, here, just on the day when Episode 7 is about to air:
http://www.tubeplus.me/player/2137828/The_Great_British_Sewing_Bee/season_2/episode_6/Episode_6/

About once a year, I go through the closets and sort out the stuff no one is wearing any longer. Now that the kids have gone, that's not as much as I used to have. After I've given away usable clothing to the local charity collection, I cut off and save all the buttons and zips on the rags that are left and shove them into shopping bags for recycling. I use them up in quilted duvet covers, which are far from perfectly pieced or sewn, but hey, sue me.

Here's a double bed duvet cover I made to illustrate the Lake of Zug where we holiday with the Swiss relatives. One thing to understand about this place is that it is funky, unglamorous and rather private, just a bunch of family cottages and sheds for a day's swimming or windsurfing. No disco here. The stretch of lake frontage that you see below was once the Walchwil town garbage dump, but was recovered and reclaimed for the clan by my father-in-law and his siblings after WWII.

The two little heads in the water are my husband and myself. 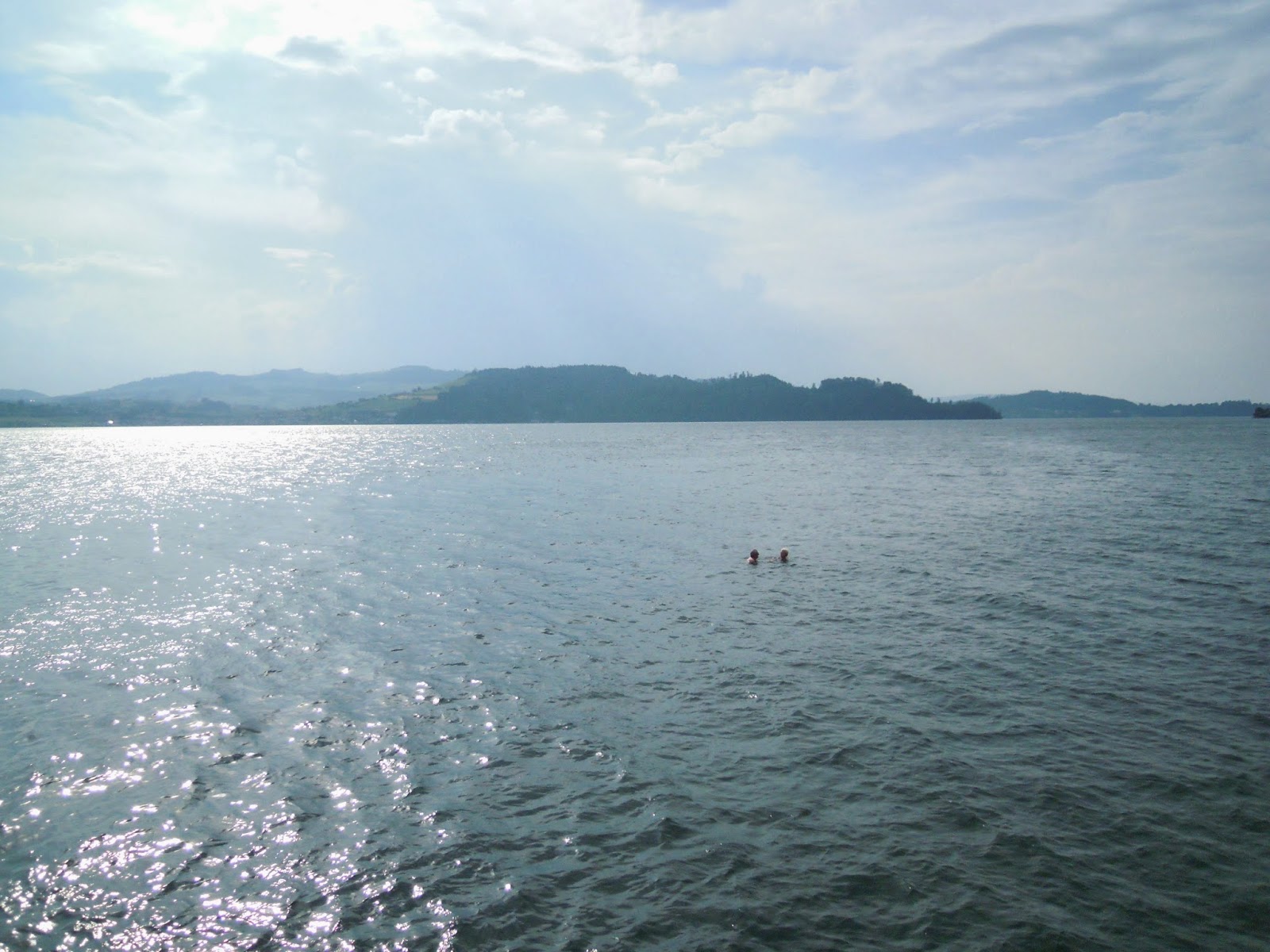 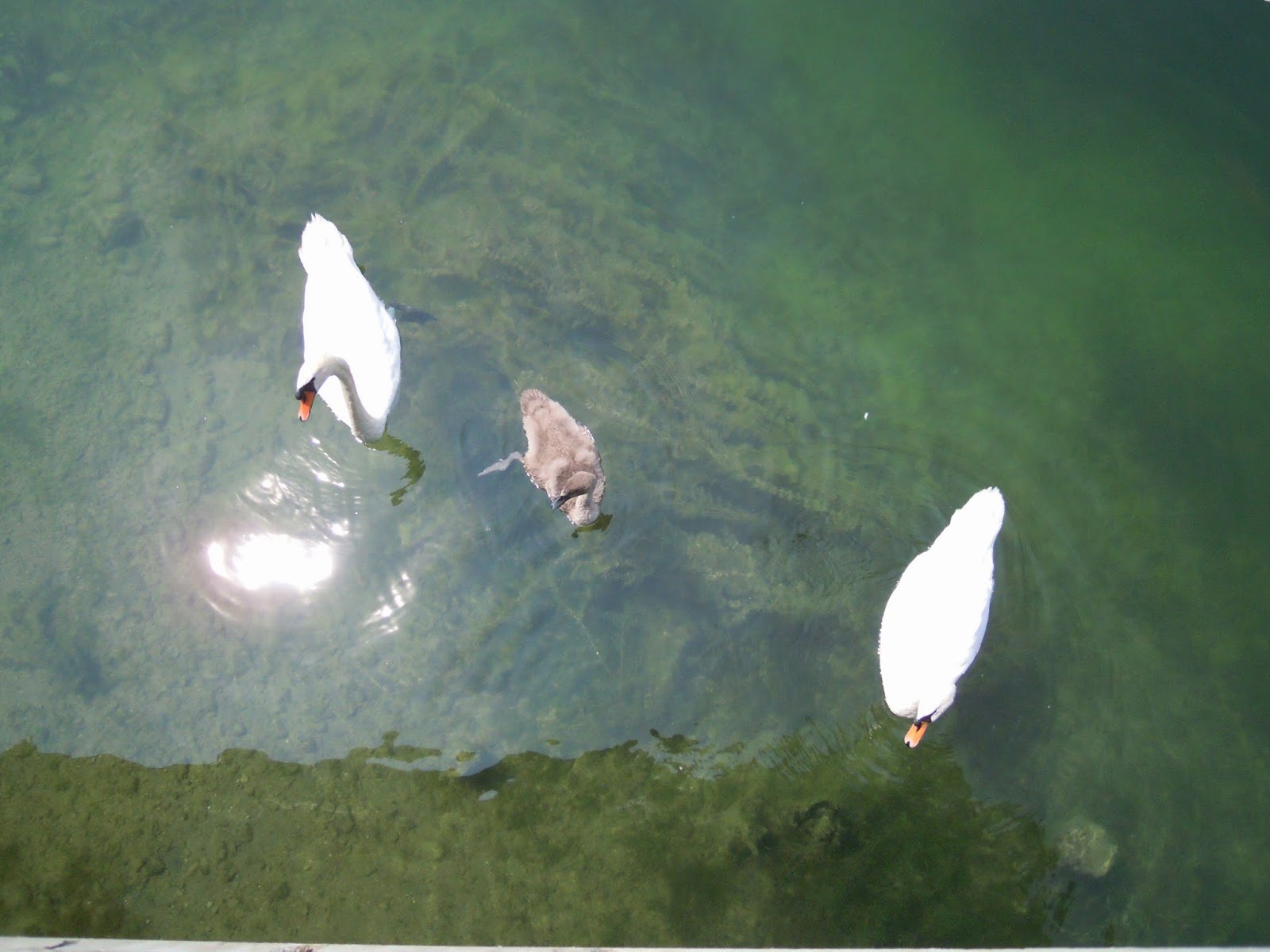 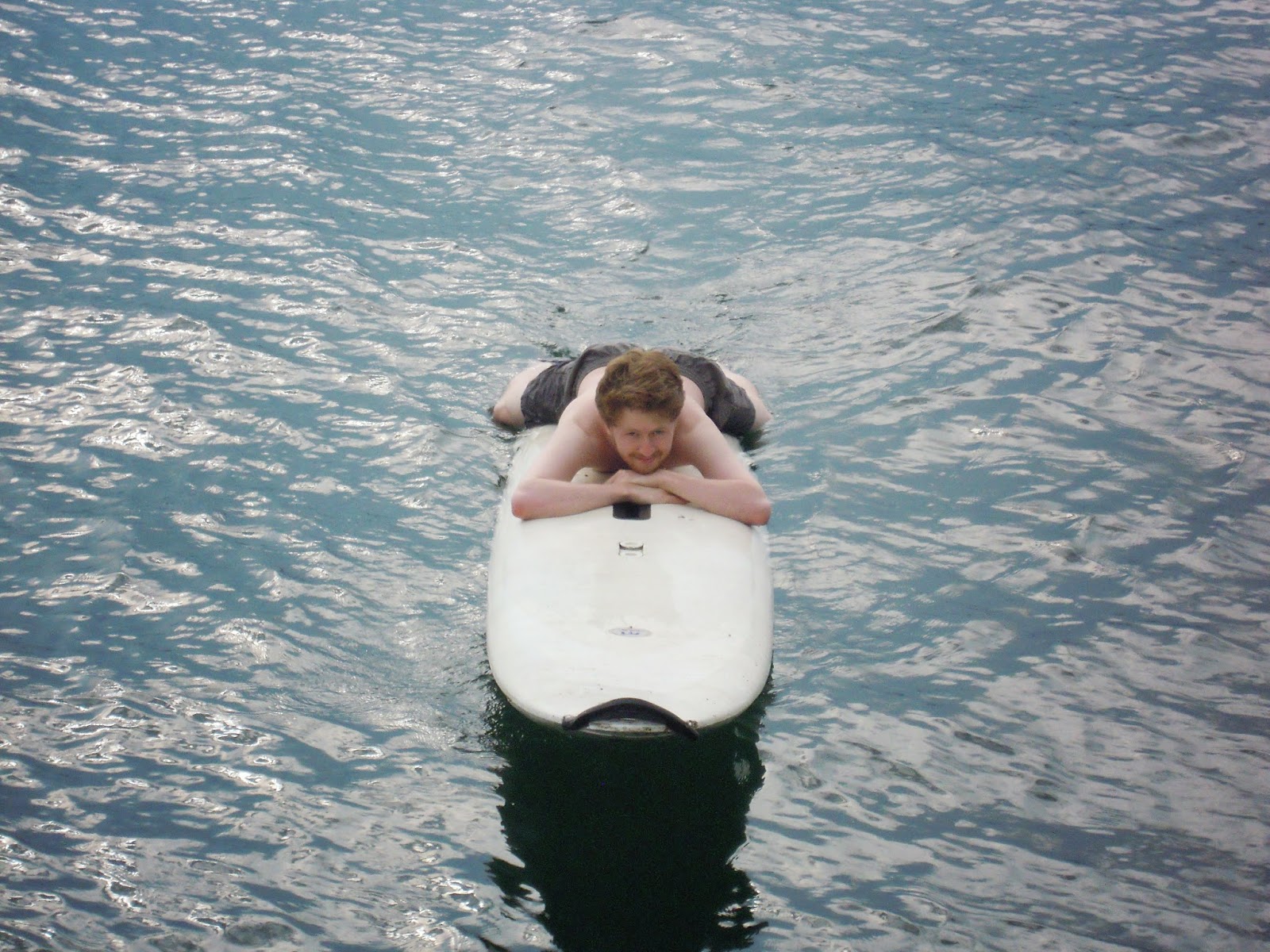 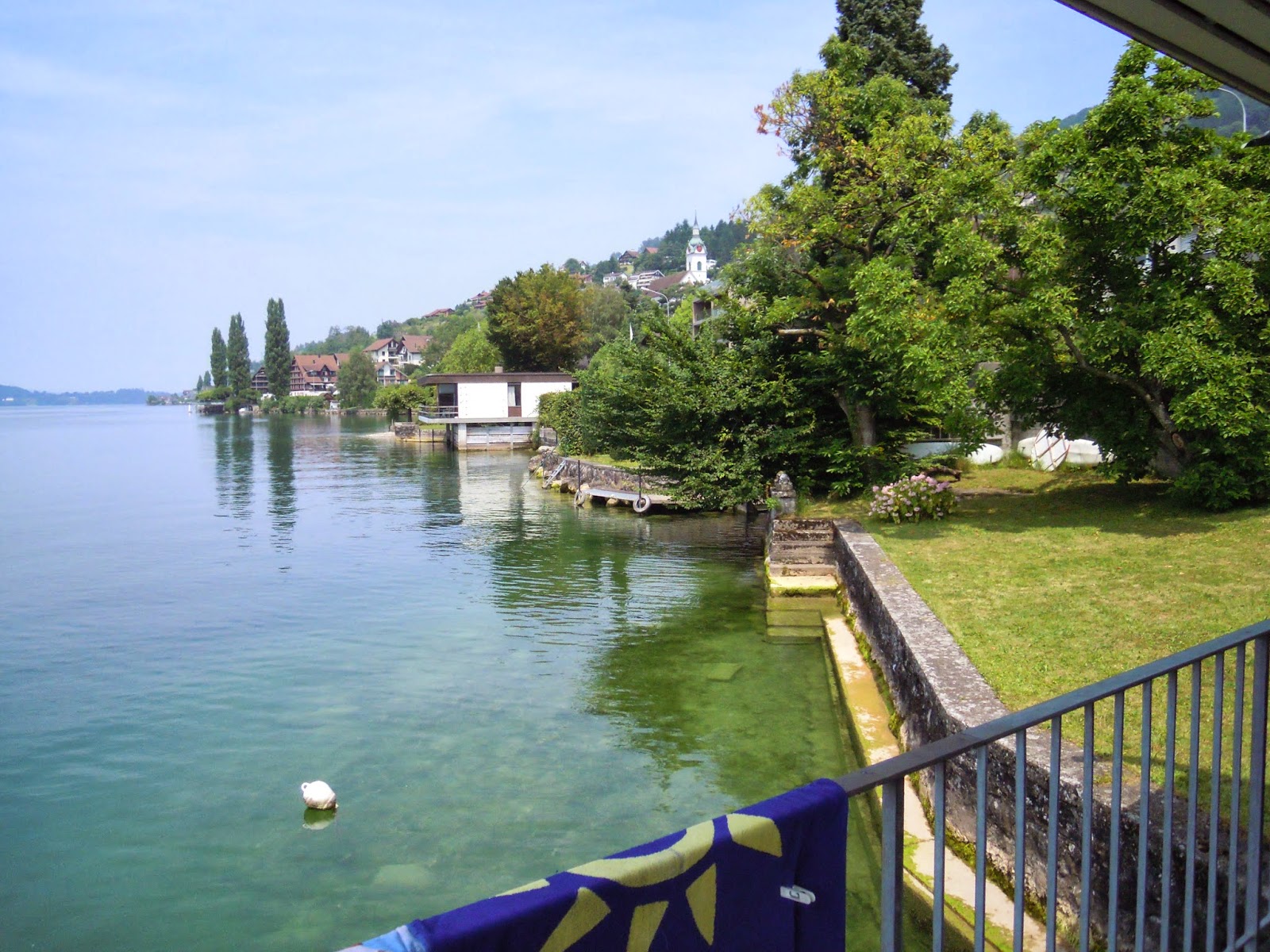 So the quilt fits in rather well. 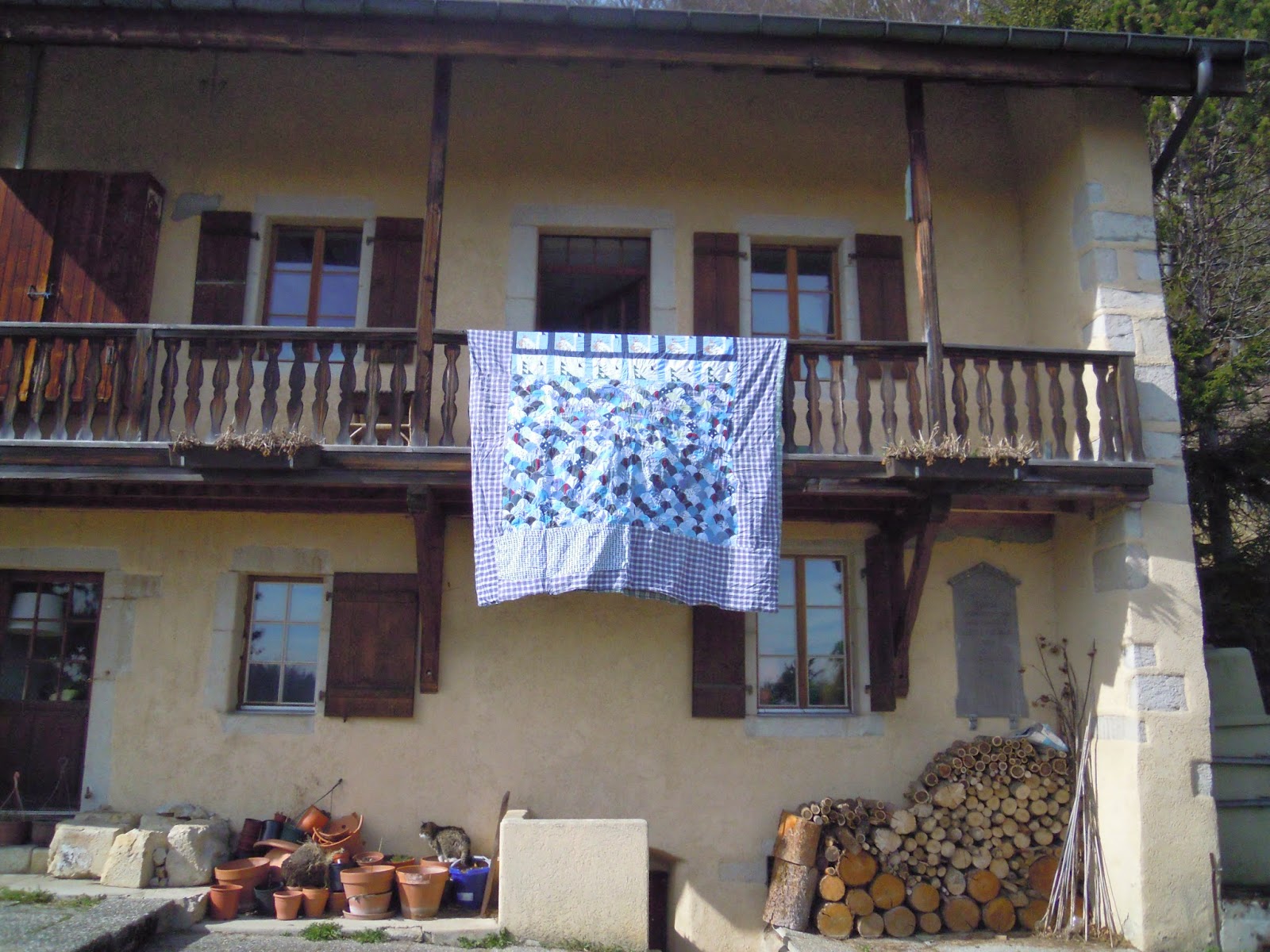 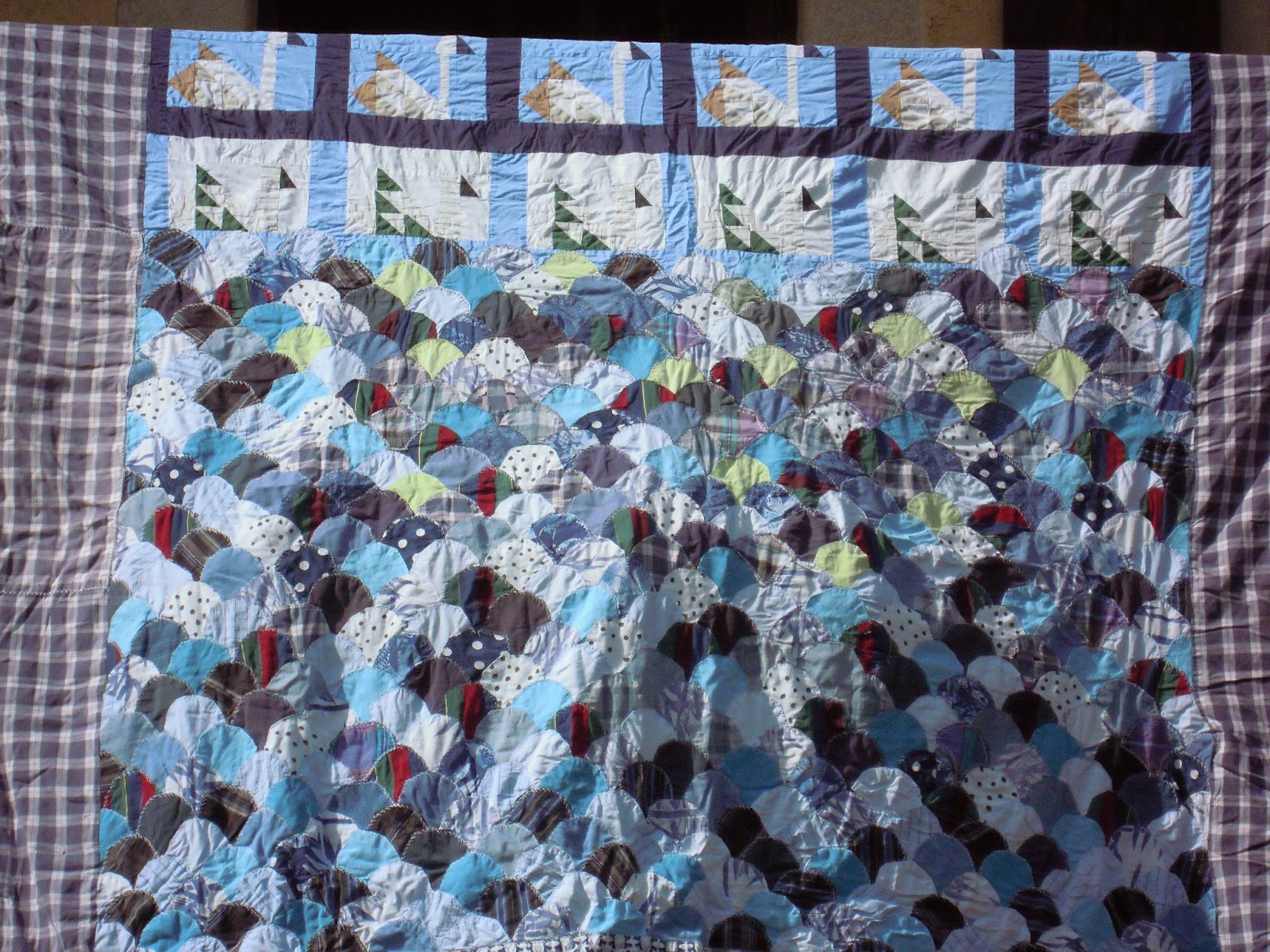 (The half circles are the waves in the water, then come the ducks and swans that beg for food underneath the boat house and then the polka-dot "rain," which you can't see in the photo.)  Pretty hokey, but it looks quite at home when I slip it over the duvet in the small bedroom at the lakehouse up there.

By the way, the duck and swan squares came from a great resource book, 1000 Great Quilt Blocks by Maggi McCormick Gordon, a warm Tennessean who has come to tea at my house with her husband and mutual friends. 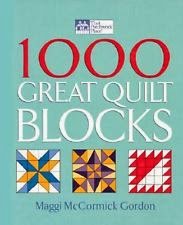 I'm now stitching together the second of the patchwork single bed duvet covers made from more genuine scraps, using a pattern found in Susan Briscoe's book, Japanese Quilt Blocks. "Second Sock Syndrome" is nothing to "Second Patchwork Quilt" Syndrome, right? But it's got to be done. After our last sleepover ski party given by the (adult) kids over Christmas, middle child reported to me that our duvet covers were an embarrassment of shabbiness.
Well, after twenty years of washing, they would be.
So here are two new duvet covers from old scraps. Still embarrassing—but in a totally original way, right kids? 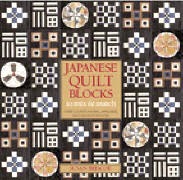 While the original pattern produces a lovely basketweave when you use only two colors, as in my pillow here and an internet sample below: 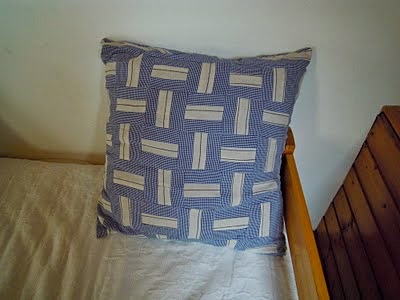 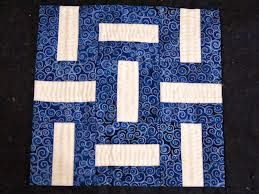 I was stuck with bushels of various cotton remannts, used napkins and ripped shirts in purples, whites, blues, grays and green.  So I ended up with this rather psychedelic 'stepladder' project which doesn't seem too conducive to sleepytime tranquility. But then, nobody sleeps at those ski parties anyway.

Here's how far I've got while watching the Great British Sewing Bee. You can see the second cover on the floor where I haven't yet staggered the piece directions, so you can get an idea of how a quilt would look if I'd left the white stripes running unbroken across. If you want to preview a quilt idea, I can heartily recommend this incredibly fun interactive quilt-planner; Quiltivate

(I used it and the result is turning out to be remarkably similar to my online test. I can't say Quiltivate didn't warn me. But Quilterbee.com just bought Quiltivate since I posted this, and the site is down for a couple of weeks. Let's hope it stays as accessible and useful as before without a lot of registering/fee rigarmarole.)

When entering our bedroom and seeing this new production, my husband reeled back, and then said only, 'Well, I've seen less respectable expressions of utter madness." 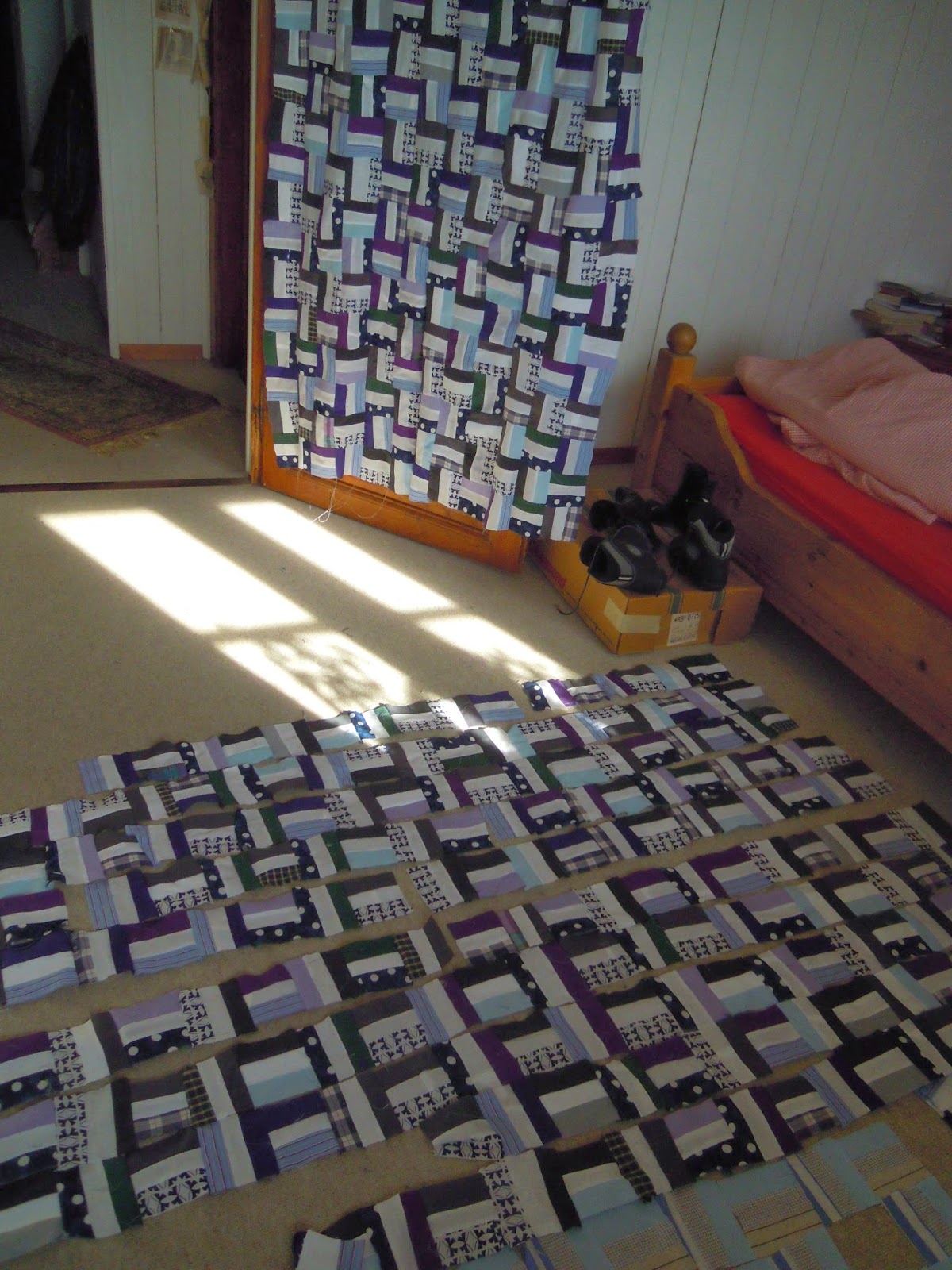 As for the Great British Sewing Bee, how did you like Episode Five? Here's a link for those of you who are outside the UK. (I wouldn't advise downloading, just click on the arrow on the lower bar to watch directly on your screen. Some of these could be dicey sites, considering their popup ads for war games and babelicious "friends.")

What courage! I have often wondered how many of us tackle those wonderful Burda variations on anoraks, so much trendier than the commonplace ones they sell in Switzerland sports shops, BUT I'm still not persuaded that I could handle the technical sports fabric, even after seeing the contestants do their best with great equipment and Patrick's guidance. Don't you love his Comments of Doom, e.g. "You're going to want to ask yourself whether you want to use steam with that," as somebody goes up in clouds of humid steam trying to apply a dry sealing tape to the nylon seams.

This one was a bit terrifying, using all the materials that are the most difficult, even for seasoned sewers. I've done a suede dress from a Burda pattern which was a fantastic experience, but I hardly ever wear it for fear of spillage. I love sewing with velvet so I could have survived that segment, just.

By now, you can find the links below, in the previous posts. I love Episode Four for one thing especially—the way David took time off from his dungarees, to help his team mates learn/manage the mechanics of the special snap pliers. The elimination of X was a complete surprise, but now it's going to get tougher to predict the competition, because they have a lot of strengths between them. Actually, I would not have eliminated X, but Y or Z, and I guess you'll just have to guess whom I mean.
Happy Sewing!
Posted by Inkstain at 07:55 No comments:

Here you go! I'm using the videoweed one. You have to keep trying until you find one without ads or registration. My favorite line is "I want to drown in a bucket of gin." Who hasn't felt like Heather when a sewing project goes wrong? And yet, she's up to the challenge if she just concentrates, right? As for the 'knock-out' victim, they're all so likeable that I genuinely felt sorry to lose—'

I know I've referred more than once now to the patchwork duvet cover which is going to have a twin, if I can figure out how to do a contrasting column down the middle of each. These are all genuine scraps from pyjamas, skirts, kimonos, shirts, and even men's underwear (washed.)

Meanwhile just to show how obsessed I can be with leaving no scrap of fabric unused, here is a jacket I made from old chinos in two shades of khaki rescued from husband and boys' wastebaskets using Burda 116 from the April 09 issue.

You will recall my awe at the piping working done on the last episode of the Great British Sewing Bee. Well, this jacket was my somewhat failed (no-cost) experiment in practicing piping. All I had on hand was rather nasty, shiny seam binding, but today I pulled it out to wear, as it seemed the perfect jacket in which to wait for an extremely unreliable electrician who finally turned up. I wanted to look a little more polished as a work-at-home type than my usual sweater and jeans. The lining is a crazy mix of leftover lining fabrics as well. The buttons were snitched from the trousers which is why I'm one button short. 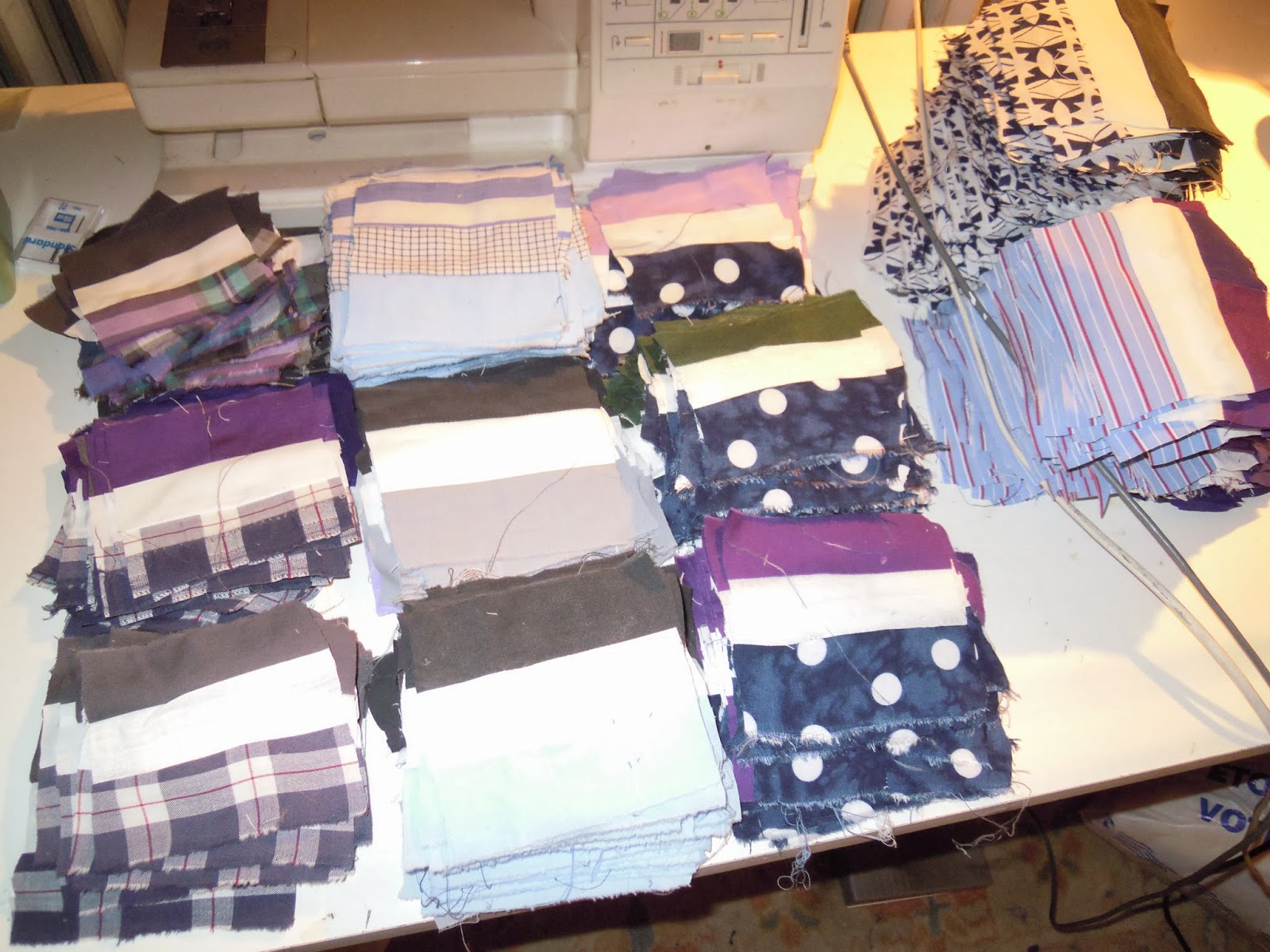 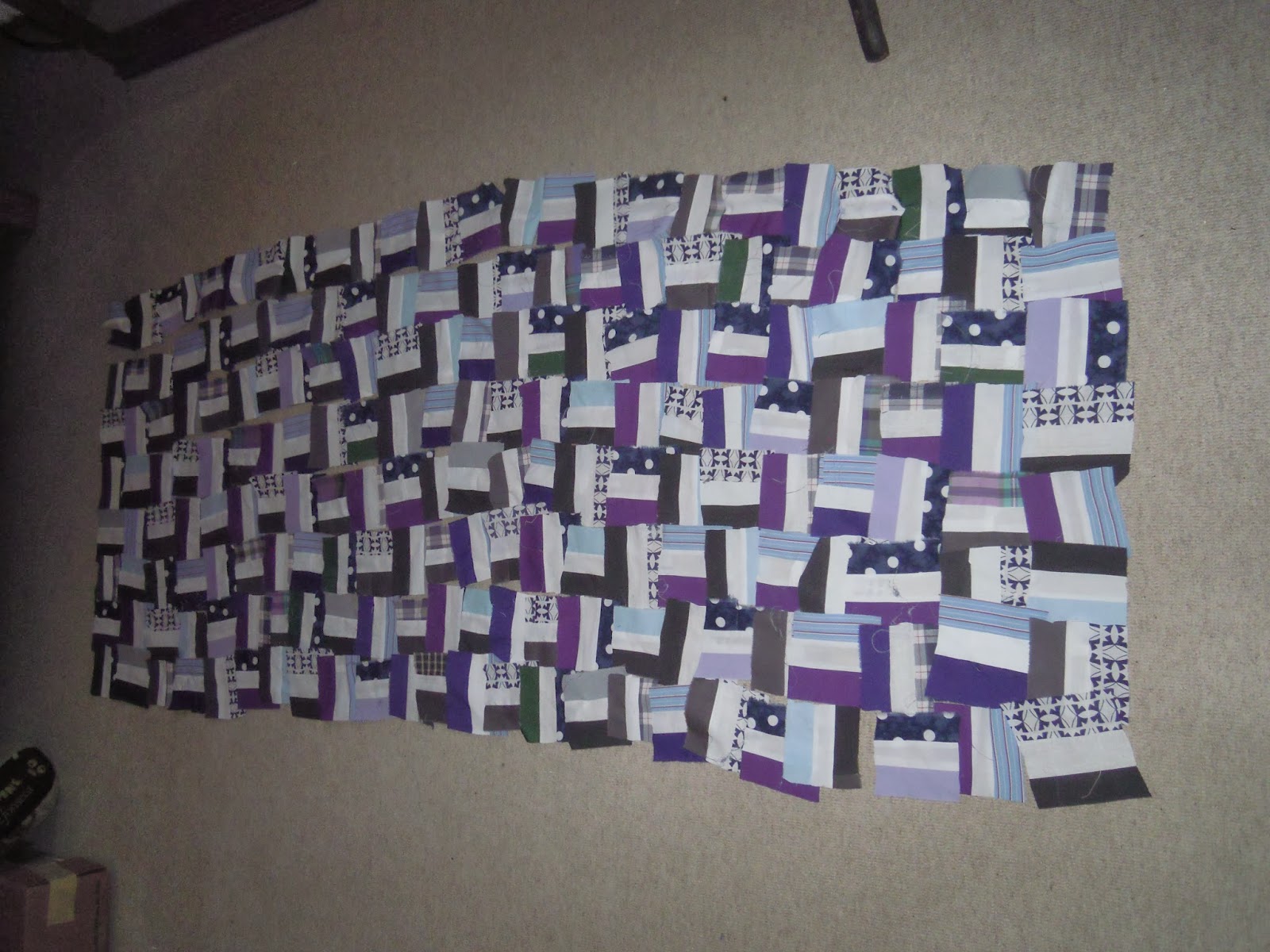 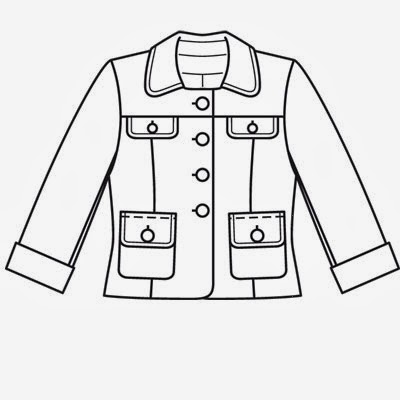 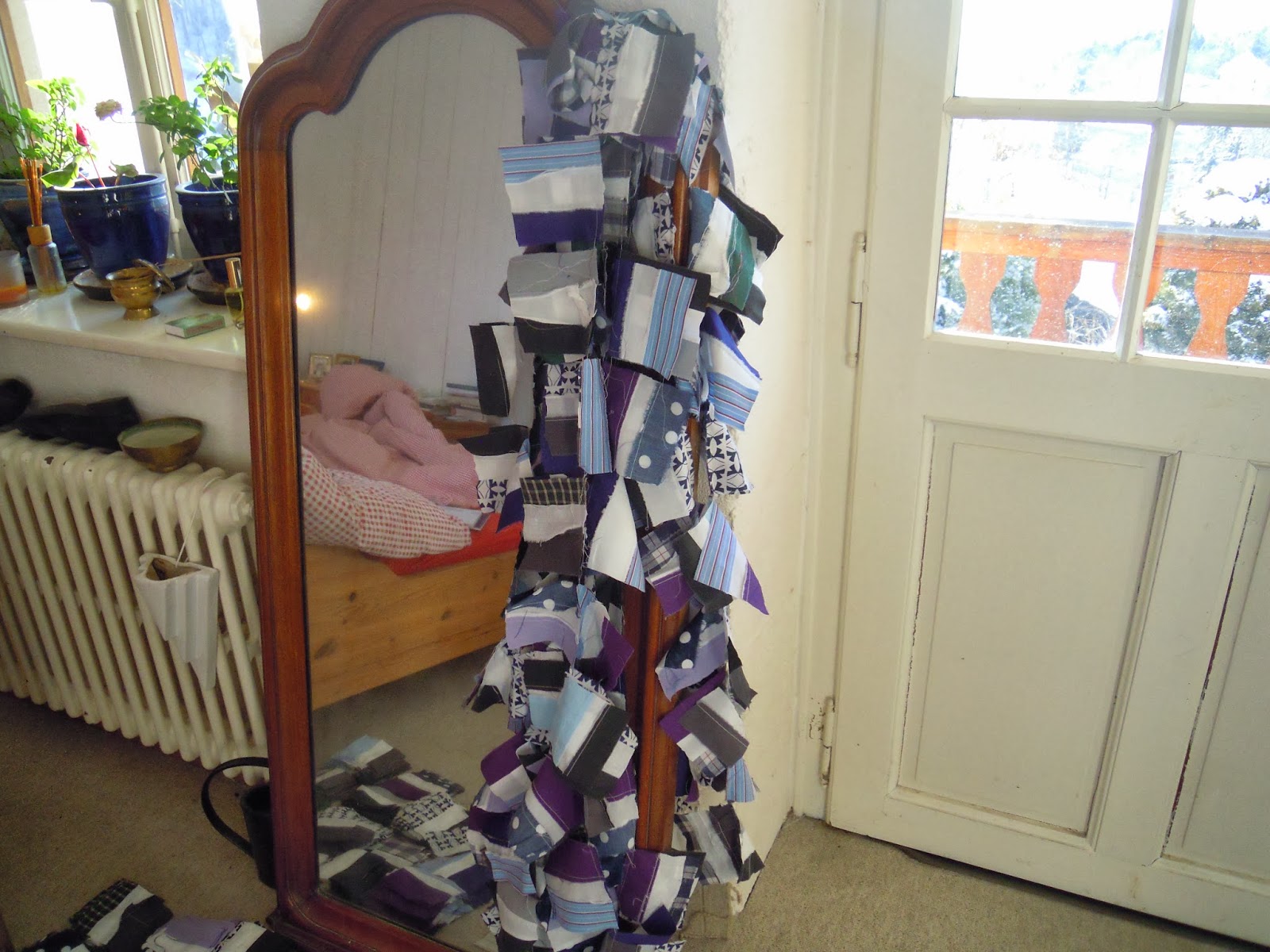 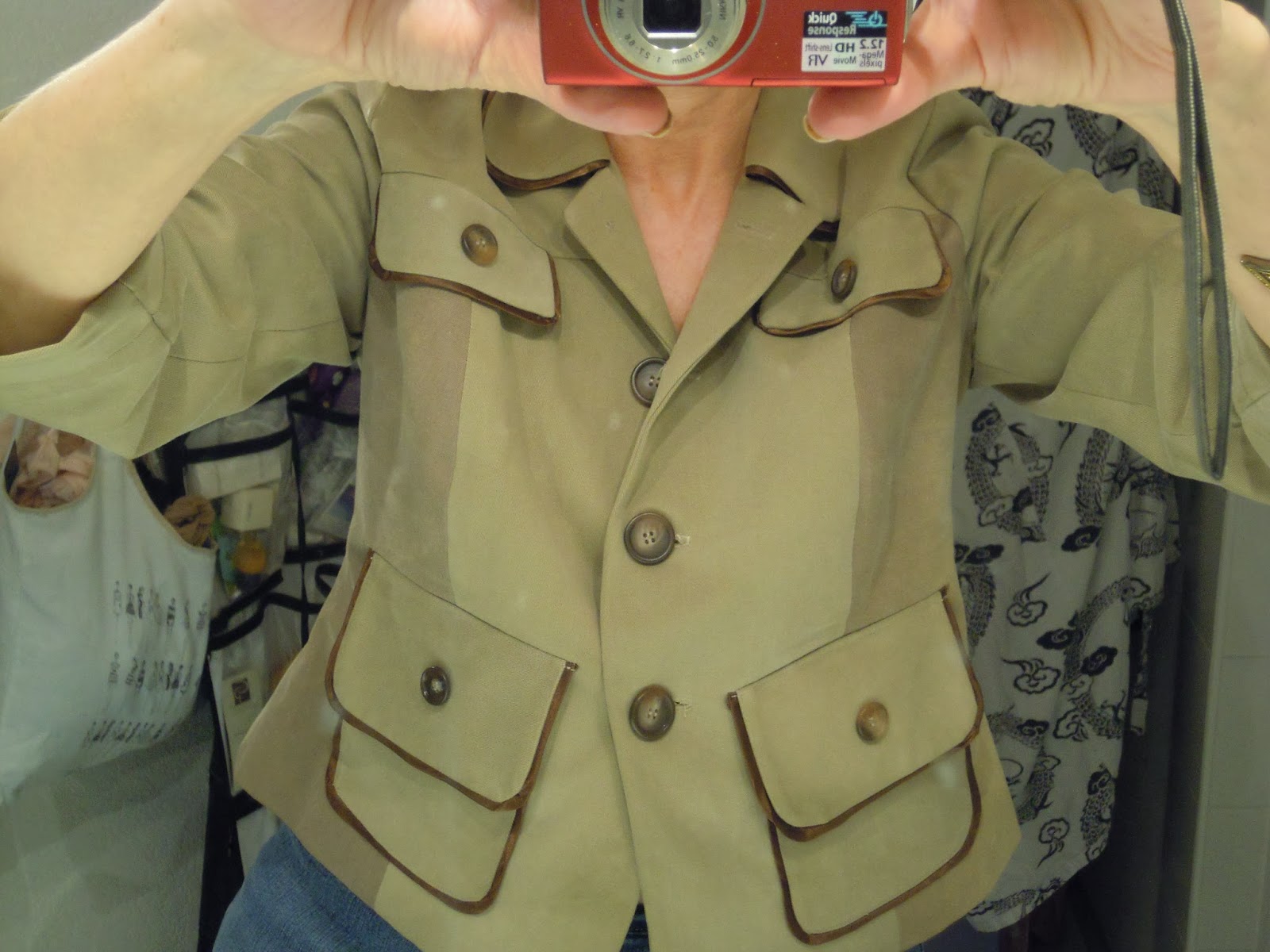 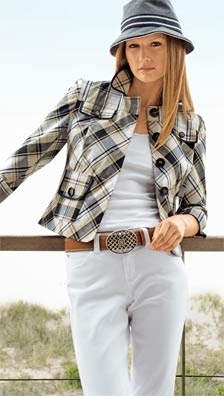 April Burda Jumpsuit! So loving this, I'm shunting aside other projects.

The April preview for Burda is up and I'm not 'in lurve' so far, except for this item.  I know DD wanted a jumpsuit.  Daughter wants one too. Who woulda thunk I'd be in love with a jumpsuit at my age?She vetoed all the other Burda designs but she may be okay with this one, she says, in marine or grey. I think the best thing is to make one in black for myself, (just for practice, hah, hah.) 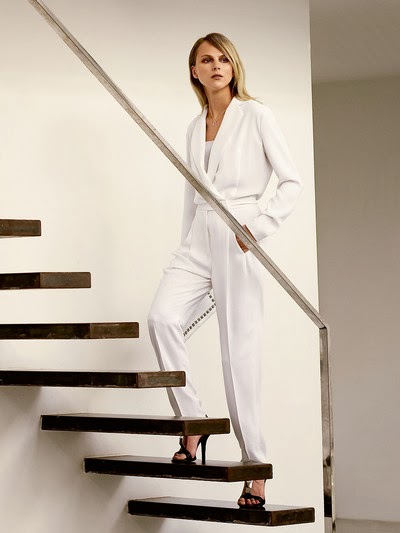 The issue only comes out in about two weeks here in MittelEuropa. It's rare for me to plan ahead, without so much as the metrage/yardage, but I think this is very soignee, n'est-ce pas? More motivation to get my stupid patchwork duvet done and dusted. 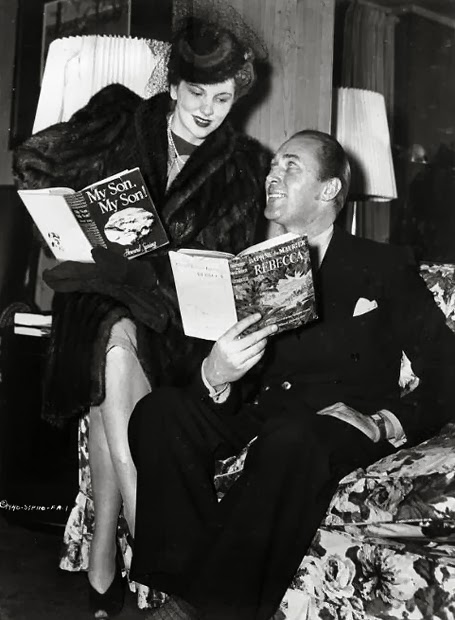 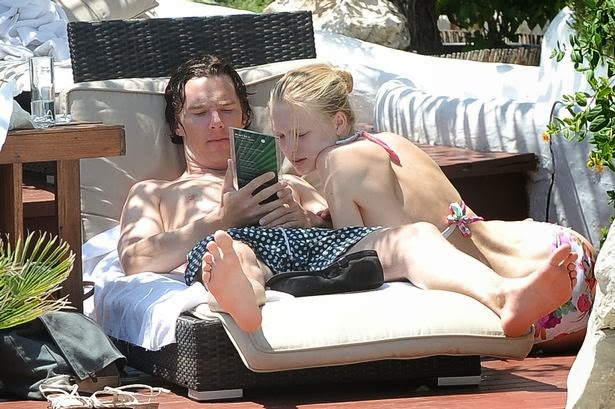