Many people are ending 2012 by awarding well-deserved blogger awards to sewists who brighten our days with their creations and comments.

But I'm starting the Chinese New Year of the Snake with a sneaky shout-out to missing friends of the Dead Sewing Blogs. Are they shedding their skins for a new incarnation? Can we look forward to seeing them rise again?

It came to my mind when I realized that most of my favorites bloggers don't list links to me, boohoo! and woops! my own blog list is a little out of date and ??? where had some of my favorite bloggers gone?

Obviously, some of them were sucked into that happy void known as new motherhood. Here I count ladies I really looked to for some nice craftmanship and creativity. Lost...lost...somewhere in their designer nurseries are:

But how to explain some of the others (apart from Lindsay T at http://www.lindsaytsews.com/, who signed off with tremendous elegance and clarity,) just vanished into a frozen cyberzone of dresses from 2010 or 2011?

Birgitte's recreations of runway items were equal to none. I fear her months of working on a Balenciaga jacket burned her out.

Or Eugenia in London at http://theworldofeugenia.blogspot.ch/

Not even a little knit dress for us, Eugenia?

Please give us a sign of life. I am actually worried about you ladies. I lost 2009 myself to an illness that I wouldn't wish on my worst enemy. Hope you're well and thriving. 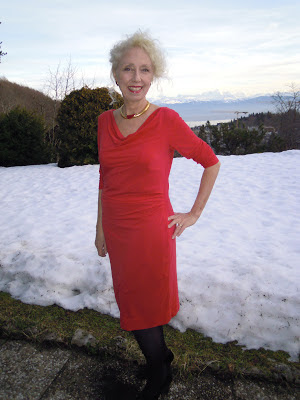 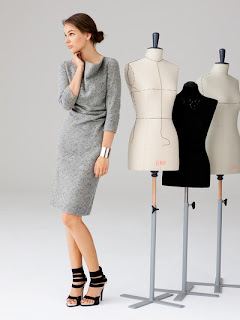 In the end, for me, this is a wonky design with good intentions. If you are pencil slim and use a better quality fabric, I bet it works as well as on their chic model above. But if you have a little bit of extra flesh on the hips or stomach, the draping adding bulk to your waist just looks like a mistake that caught on your Spanx as you came back from the ladies' room. I like the concept but would only remake it in a better quality woven after losing ten pounds. My choice of red knit was just too limp to pull off that cowl neckline as designed.
Posted by Inkstain at 05:25 9 comments: