One of my COVID confinement resolutions over the past 18 months has been to improve my French and learn German, two of Switzerland's four official languages. It's about time! To help my French fluency and vocabulary, I subscribed to the daily Le Temps and the weekly Elle (which is pretty much eye candy, I admit.) There's not much to say here about the newspaper, which certainly informs me about local affairs. As for German, I finished with Duolingo and am now stumbling through murder mysteries by Donna Leon in the German editions by Diogenes.
Meanwhile, each week, (at least until the summer set in,) Elle did a set of dedicated fashion pages every week, which I always found inspiring during these unfashiony, depressing pandemic seasons. There was one page featuring their 'Dress of Spring' in pink ( see below) that I just fell in love with.
I quickly ordered some viscose crepe and viscose rayony stuff in two retro flowered prints that I hoped would capture the 'feel' of the Elle looks. Please note that these were bargain-basement buys in pre-cut 3 metre lengths from Coupons de St-Pierre in Paris. We're not talking big bucks here.
And I searched far and wide (okay, okay I ran through my decades of Burda for an afternoon) looking at years of maxi patterns. Despite some misgivings about the 'muumuu' effect of a so-called 'buffet dress' on a woman my age, I finally opted to try the April 2021 Burda cover design (see in green below) after watching the Great British Sewing Bee episode on that style. I was taken with Burda's nice detail of turning the endless gatherings into stand-up ruffles along the cascading tiers. (I realize now that a buffet dress was precisely one look this Elle page avoided!) 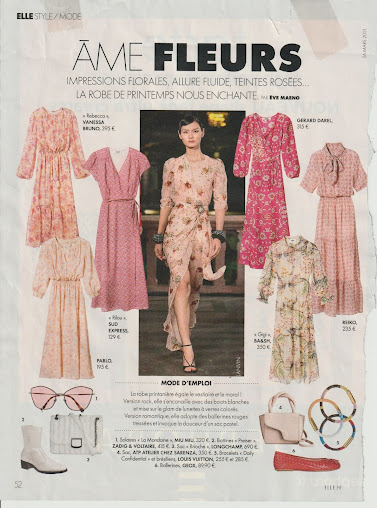 For the second dress, I was going to settle for a Burda wrap dress when I fell in love instead with a cute model of McCall's 7974 worn on YouTube by the beautiful French sewist, Raphaelle Dvn, (see her version below) but Raphaelle is some forty years younger than I am. I should know better, right? This popular model is supposed to be a knockoff of something called the Cult Gaia Willow Dress. Okay. I'd never heard of it, but I'm not exactly ahead of trends.
For weeks McCalls didn't have a paper version in stock, so I finally broke a longstanding resistance to PDF patterns and downloaded it during a $4.99 sale. I always hate Burda tracing, but I hate printing and scotch-taping computer paper even more.
I cut out the McCall's dress first.
DISASTER! Only after I'd suffered through constructing the pattern, reminding myself that one time, long ago, I sewed with Big 4 patterns with seams included, and congratulated myself on an exhausting evening of pushing pins through stiff paper, did I glance down at the floor and see a long and important pattern piece still waiting UNUSED. It was the side back section of the skirt, "cut 2" no less..
And I had no more fabric.
And of course, neither did the good people in Paris, because that is the point of their existence, selling remnants into nonexistence, right?
So now what?
I had only five sections of a seven-section full gathered skirt: two front, two front side, and one back cut on fold.  Anyway, after a night of kicking myself, I resolved to see if the sections of the skirt that I did have would reach around the waist seam, and praise the Sewing Gods, after basting with very narrow seams, they did—just. My dress now featured a kind of thirties-ish fitted and flowing skirt rather than a cottagey, gathered skirt. The result is not what McCalls intended, but perhaps a little less 'milkmaidy' on a woman of my years. (btw, the very low-cut  V-neck required some digging into the lingerie drawer for an almost forgotten nude bra with a very low-cut middle.
The final insult of this project was that 7974 requires 13 buttons 13!!!!@$% and I had to order self-cover buttons all the way from Germany because my local Swiss outlets didn't have any in stock.  Continuing my Olympic quest for Dodo of the Year Gold, I ordered 11 cm size when I should have ordered 15 cm; getting these tiny buggers covered with slippery viscose was the work of a whole weekend and many curses. 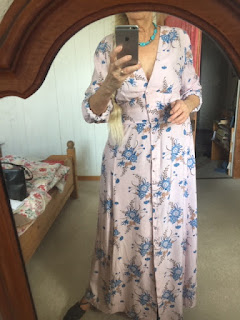 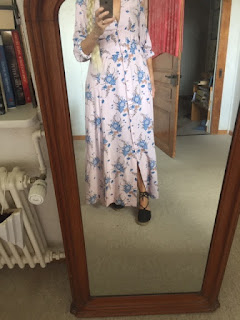 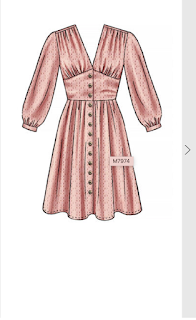 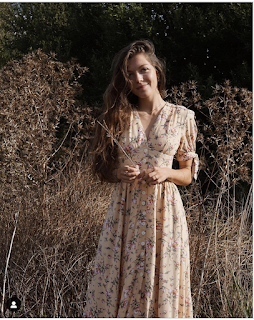 Raphaelle Dvn, in Corsica, a lovely sewist on instagram, and Pinterest. Her vlog is great for practicing French comprehension with a slightly regional twist.

And Disaster Two? On to the Burda cover dress. This demanded a mammoth job of cutting out many ever-increasingly large rectangles and again, I was trying to squeeze a 4-metre maxi pattern into a 3-metre remnant. I was pretty crafty by now and managed it by cutting the bottom tier as economically as possible and making up a little shortfall of about twelve inches wide using fabric left uncut elsewhere along the margine of the shortest, upper tier.
This is a slightly kinder V-neck than the McCalls in the bust area—still deep but not 'find me a special bra' deep. Also it asks for rouleau button loops. I hate making rouleau loops. Mine came out like little origami folded triangles, instead of loops.
Also, you can't tell from Burda's line drawing (below) but it includes a simple, non-gathered mini-lining under the neck-facings  down to mid-thigh. This gives you a built-in slip—nice if you're using very lightweight fabric as your main fabric. Not nice, if you forgot to order lining fabric and have to waste time going to a store to get it. (Me, of course.) 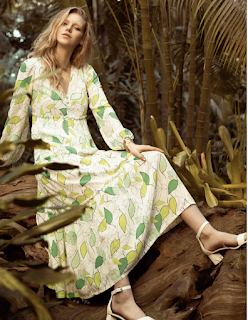 But you should use a very, very, very lightweight fabric. Even my crinkly viscose crepe is a little too thick. Because this dress is a fabric hog. You want to feel like you're flowing in the light seabreeze, not drowning in a shroud, readied for burial, right?
But that wasn't the disaster, believe it or not. I could live with the sneaky piecing in the back of the lowest tier, and the pointy button loops, and the missing-lining-fabric-excursion, but only after assembling the dress (by which I mean endless nights of gathering) did I notice a hole and a rip about an inch long, damage from the tagging by St-Pierre in the warehouse, smack in the center front of the upper tier.  Had I examined the fabric before cutting, these tears would have been relegated to the back of the bottom tier or left altogether on the cutting room floor.
Well, I'd had it by then—well past cursing. This whole Pink-Dress-of-Spring-Thing had taken up weeks of my time and spring 2021 was well over! So I just finely machine-seamed these two tears closed and hoped for the best, ironing them as flat as possible. Luckily wrinkly crepe takes an iron well. Can you find them now? I can't— and I'm wearing the damn thing.
But let's be frank. There is a Sad Sack thing going on with this Burda model on me. Notice the lighter fabric on the Burda girl doesn't pull down the Empire waistline like my viscose crepe does. Short of a seabreeze on a terrace in an Italian hotel at sunset, I feel more 'muumuu' than buffet. But before I bin it, I think perhaps I'll raise the hem a few inches and sit on a jungle tree stump in heels like the lady above. Or at least give it a straw hat and some higher wedge sandals...and a cocktail. 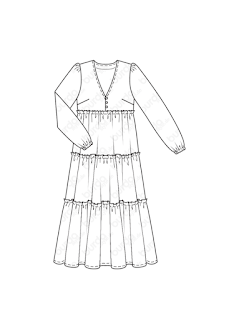 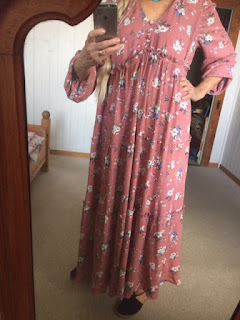 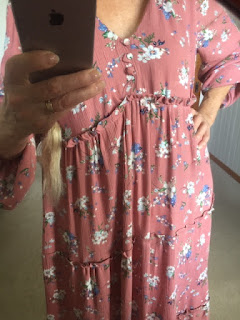 This dress couldn't be simpler to make and I imagine what determines the outcome, even more than usual, is your choice of fabric. I used a pure cotton remnant from Coupons de St Pierre in Paris (https://www.les-coupons-de-saint-pierre.fr/fr/)
who supply offcuts of 3 metres each for a song. It took me a while to get them to ship into Switzerland where I have to make sure that every order comes in under Sf60 including postage, so the total doesn't double because of added import taxes (EU to Switz).
I chose a floral that looks rather Japanese because the wrapped tie design struck me as slightly reminiscent of an obi tied at the back of a geisha's waist. My fabric might even be a quilting cotton, since it isn't drapey or see-through but it is certainly lightweight and I wore a short slip underneath for a little body here in the Swiss mountain summer.
I might have lengthened the skirt slightly, but not by much, and I included a bit of side slit to ease walking. The folded cuff is interfaced and sewn down which I like (not rolled, like in Burda's photo) and I finished off the seam edges inside with a simple zigzag stitch. (I don't have a serger, and frankly, have survived over 50 years without one.)
My one complaint about the design is that this dress begs for pockets, which I will add.
From the front, the design can have a slightly dowdy housecoat feel to it, (needs a necklace to improve the plain V neckline) but the bow over the butt at the back is very saucy, if done in a crisp fabric. Linen might also be nice. Burda used a viscose for their rendition (see below) which might reduce the perky bow effect, but seems to have made their bodice more flatteringly drapey. (Mine comes off as a bit boxy.)
Anyway, it was perfect for a recent Sunday lunch here at home where I did all the cooking and didn't want to wear anything floaty or unwashable over a gas flame and spattering frying pan.
I would say this is a perfect dress to throw on for an elegant breakfast buffet in a really nice hotel resort, or sightseeing with hat and sandals. Not as vulgar as shorts or as revealing as a sarong, but very easy to pack flat, light and simple as a bathrobe, yet flirty and fresh. 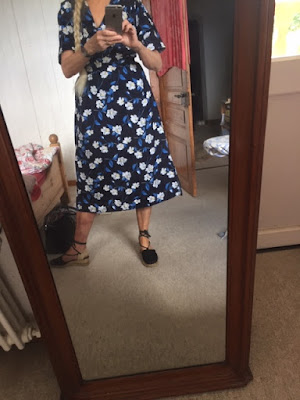 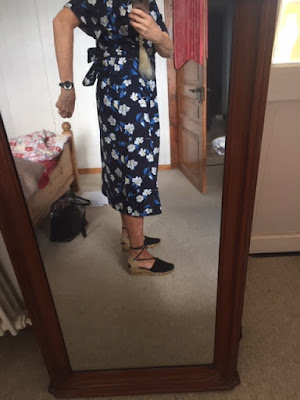 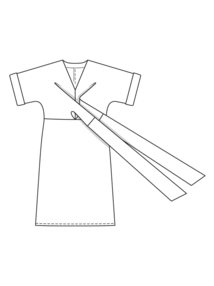 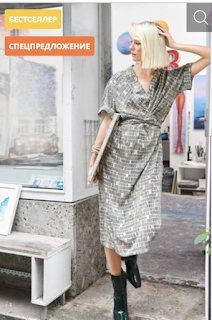 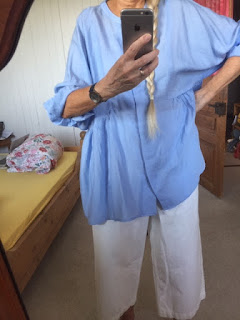 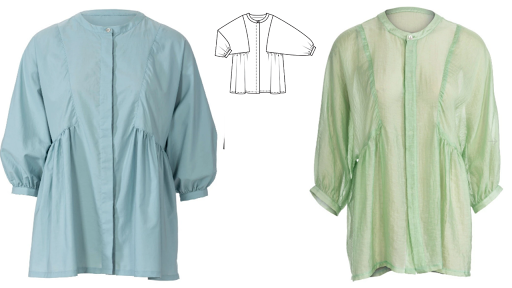 As part of a wardrobe that's becoming rather 'capsulized' around variations of French, cornflower, or light blue, this was a wildcard, a blouse with a difficult and voluminous cut that demands sharp interior corners to accommodate large dolman sleeves. Notice in the Burda photos just above the difference that fabrication makes--in the crisp cotton you get fuller sleeves and a good peek at the interesting design, while the viscose green on the righthand side droops to ill effect.

Unfortunately, I did my version in a strange blue viscose ordered online that lacks enough crisp hand to keep the definition. This blouse seems to be an unconscious echo of the drapey Burda blouse I made last year in a similar blue with a similarly strange diagonal cut and less than successful flouncy sleeves.

It seems that I just can't learn this lesson. If you want to get into architecturally-cut blouses that show off novelty lines, don't sew them in shapeless viscose!

Next up--I confess to an experiment with Fibre Mood, a nostalgic dip back into the McCall's pattern world of my youth and the famous (almost) Burda origami twist V-neck dress!

Posted by Inkstain at 07:38 No comments: