No, not acupuncture needles, or at least, not yet.

I'm wondering where the sewing mojo went this winter. Maybe a lack of outings requiring that I actually get dressed was a factor? I've been living in rotating pairs of Promod leggings in black, gray and navy under motorcycle boots and pullovers/jackets for months.

But that can't be it entirely. For decades sewing was an essential therapy and joyful hobby, whether I wore the items often or even needed them. Perhaps it was a question of identity and hope? There were once days, when seeing a Ralph Lauren, YSL, or Donna Karan Vogue Designer Pattern just released, that I went bananas with excitement, investment, and effort. Voila!

That was decades ago. It wasn't just appreciation for some pretty spectacular, highend patterns, but also that I worked in radio, television, and print journalism, an important incentive. I was 'out and about.'

I was also inspired by the stylish women in my family before me: a French Canadian grandmother who sewed up fine British wools purchased in Toronto, an aunt in p.r. in Detroit who merited an NPR obituary for being the 'Auntie Mame of Detroit,' and a mother married to a television director in Hollywood. These ladies didn't ever let themselves 'go'. They were hanging on, right to the oncologist's last deathbed bye-bye.

I have recently counted up all my Chanel-type jackets from Vogue 7975 and another OOP Vogue (five makes) and all my tie-neck or ruffled blouses (maybe 10) my eternal white shirts same, my black skirts and trousers, my kimonos (4) etc., safari jackets or vests (lots) and saw that I had fixed on my style some years ago. "Parisian wannage lounging in kimonos on safari," or something…

I guess it's obvious that I'm not going to veer off at my age into vintage 50's looks or looks I wore already, e.g. 70's bellbottom and Romanian peasant blouses or the 80's padded career woman/disco puff-skirt queen or 60's sheaths.

Perhaps it was with this full closet on my conscious that I stopped sewing for many months through the winter.

Oh, the tone of despair! Sorry!

This was a new variation on the Best Baby Sweater in the World for a new mother who hates the pink/blue gender thing. I ended up with a classic mini-Aran, sort of "Ralph Lauren for Human Bean" look. But I fear that the classic wool blend, rugged enough for facing gales on the Irish Sea, might be a bit rough on the sprog's skin. Next time, I'll upgrade to softer baby yarn. 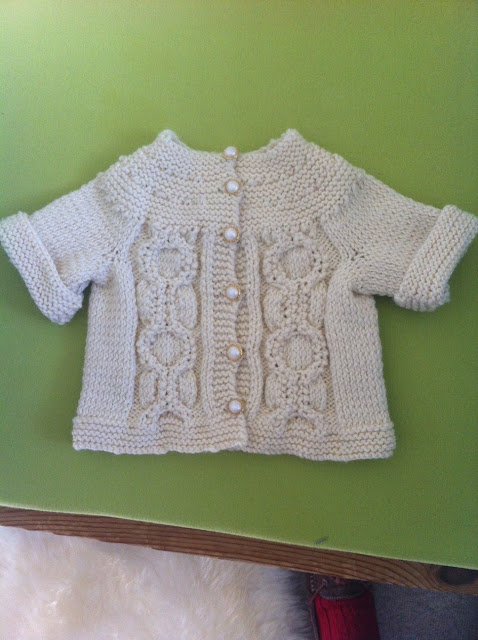 I made socks, too, using leftovers from my stash bag. I always use the two-socks-simultaneous method to avoid the dreaded 'Second Sock Syndrome,' and because I colorblock, etc., it's a sure way to make sure the socks match exactly. My heel-turning is still pretty hellish, requiring a few tacked-in stitches at the sides to close little corner holes, but every recipient reports that these socks are just nifty in ski boots and frigid UK winters. 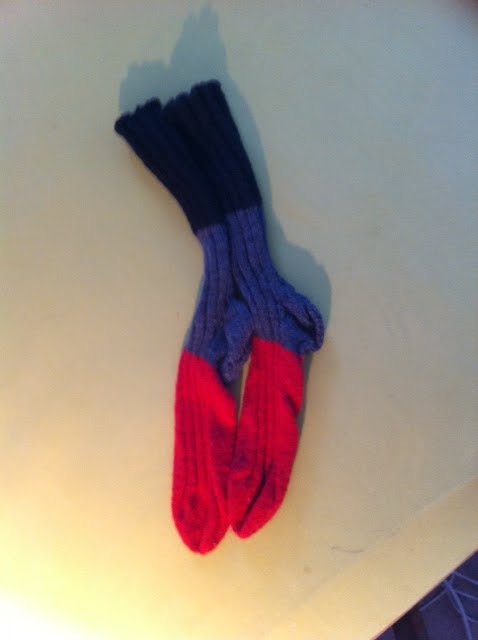 I hadn't knit socks in about five years or so, so it was good to refresh that skill while watching the news, etc.
Here is a second pair, still on two double-pointed circular needles, for those of you who don't know what I'm talking about: 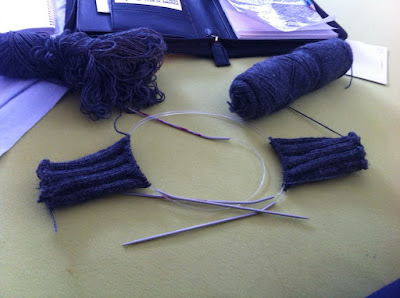 Notice that one set is painted with nail polish so that I keep the rounds worked on the right circles.

And, third, while managing a full house for the week of Christmas, I knit Burdastyle's Jan 2016 beanie to go with the Burda Easy fake blue mink fur Wilma Flintstone vest reviewed below. This was the first time I'd ever heard of an Italian cast on and it took me three goes to really believe that I was supposed to use a stray string that was removed after the cast on. Wasn't the whole thing going to fall apart in my hands? Um, no, it worked, although I didn't trust my French skills and checked with YouTube videos in English to get the idea. 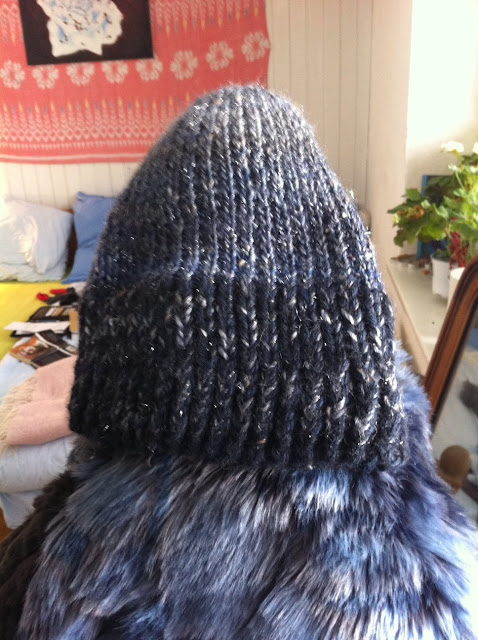 A new skill. I'm not dead yet.

Posted by Inkstain at 01:45 No comments: