So I tried Patrones for the first time..with mixed results

After my long gripe about the repetition of designs from BurdaStyle, I had to put my needle where my mouth was, so to speak, and try another pattern company. Here in Switzerland we get some translated versions of Patrones magazines, delayed by at least one season after translation into Couture Actuelle with instructions that are even more minimal than Burda's, and outlined on the pattern sheet in only half the sizese.g. If you wear a 42,  you might have to guesstimate when tracing between the lines for size 40 and 44. 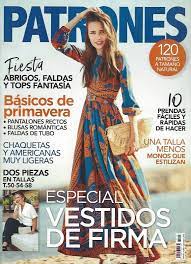 But still, some of their designs are very chic indeed. And lately Burda has been looking clunky rather than trendy.
(But in one of the draggiest new developments in the home sewing world, this company sells translated magazines too late in the season or only make their patterns available online to people outside the Spanish market via an app on Google Play for downloading pdfs. For the French market, it seems, they choose to translate some of the mags, but not every one, as far as I can make out.)

Anyway, I grabbed the French version of the magazine above, full of some delicious maxis meant for last spring. I had a bit of a drama trying to estimate whether my size was the same as the German Burda ones, and according to the charts, I had to size up.

I'd seen a lot of patchwork motifs this summer and got a nice, fun viscose for nothing much from Coupons de St-Pierre. The colors were a bit drabber than I expected, definitely on the autumnal side. So I traced out this maxi shirtdress: 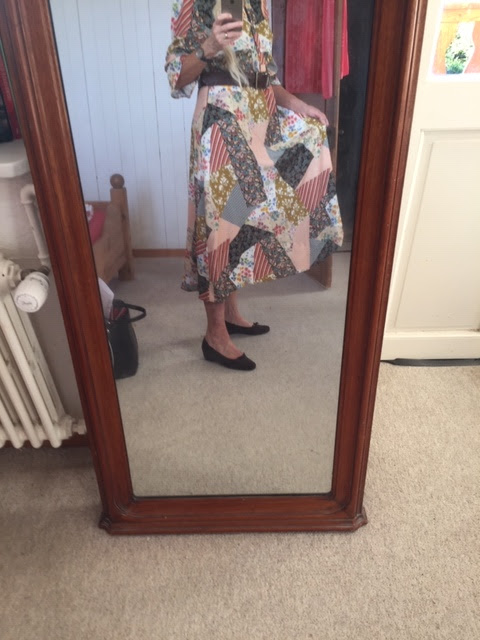 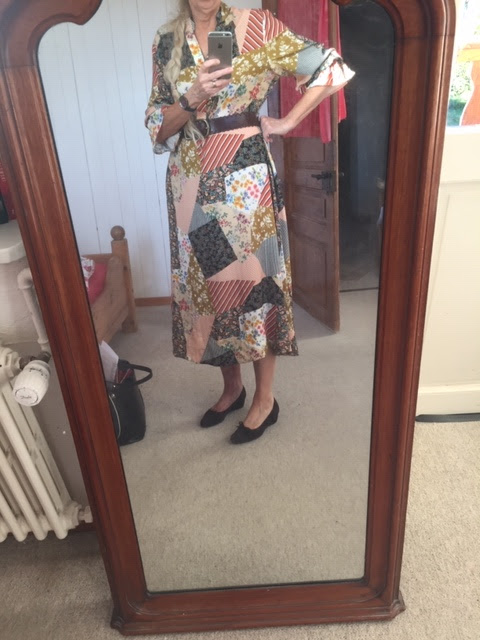 It wasn't entirely a failure, and certainly educational. The bodice is just too roomy and the armholes too low. I had to take in both sides of the skirt before inserting the side zipper by hand. I shortened the skirt when I saw that it was just all TOO MUCH, too much patchwork business, too much fabric, and way, way too much droopiness.
After finishing the dress, I did what I should have done from the outset. It turns out that I should have cut a 40 everywhere in the bodie and moved to a 44 in hips and waist.
I don't know about other people's experiences with Patrones, but I suspect the mandarin collar piece was not well drafted, as it proved too short to enclose over the upper edges of the front facing. I re-checked the pattern template sheet to make sure I'd been faithful to the lines. I had to rip and restitch the margin of both front collar curves, reducing my 1.5 cm seam allowance down to a mere 7mm seam to make the piece long enough to enclose and complete finishing the raw blouse facing upper end edges.
I'm also not convinced by the style of the skirt's design. It was made up of two semi-circles which ended up with a lot of the drape collecting at the sides and resulted in bias droop at the sides, while the center of each piece was not cut on the bias, making it shorter in front and back than the sides. I let the skirt hang overnight and remedied the uneven hem with careful handstitching. A skirt this full, should in my opinion, be cut in more equal gores, to distribute the bias droop, like the McCall's maxi described in a previous post about 'pink dresses'.
Fed up a little, I realized I had no inclination to make a man's type tailored cuff in the sleeves, so I binned the interfaced cuffs and went for an elasticated ruffle sleeve which was more in keeping with the feminine feeling of the patchwork. By sheer coincidence, I had three self-covered buttons in my stash left over for many decades from my (now grown) daughter's baptism dress sewn in pink silk. They look fine, and as there was no need to insert buttonholes, I did a dirty fix and just sewed the bodice closed under the buttons.
I've styled it here with a brown leather belt. It's not a dream dress, but not a disaster, as experiments go. I'm not quite sold on Patrones as a substitute for BurdaStyle yet, but I may try a smaller project like a blouse to get the fitting/sizing right.
I wore it to host a luncheon last weekend and got one compliment on it, which was nice.