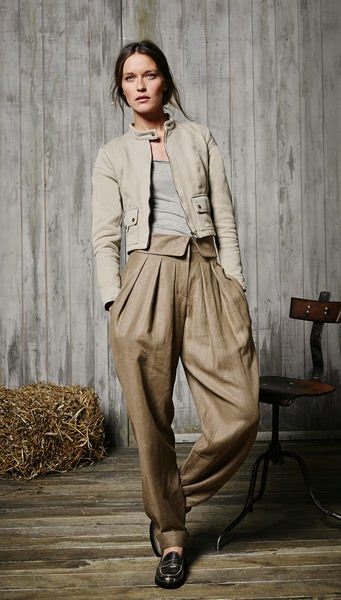 As many of you know, I'm partial to the safari look and have already posted on sewing and styling a 'safari' wardrobe in "Safari Styling, a Primer," which you can read by linking over to  Part I, Part II and Part III. There are many great Burda safari looks already available in back issues.

So if I'm the Burda safari style blogger by default, it behooves me to comment on the so-called safari feature in the latest Burda. When I saw this previewed, I had high hopes. It's an attractive collection of items. But I won't be sewing most of these, even though I'm going to Marrakech for a few nights (remember, I'm in Geneva, which is Easyjetting distance only a few hours south to North Africa) and safari wear could not be more appropriate.

Most painfully, this collection lacks the key item, a real safari jacket. They've given us a 1920's waistless coat instead, (sort of a Lady Mary raincoat, which I rather like, but it's not classic safari,) along with a modified motorcycle jacket, pictured above and below, which looks pretty sewable, (especially compared to the white leather motorcycle jacket in January's issue with the totally superfluous second zipper slapped on the top.)

Maybe the idea of this collection was to evoke the Out of Africa mood of a Finch-Hatton flying jacket and the sort of coverup duster Karen Blixen might wear?

The most useful item may be the basic 'cargo skirt.' Made up in denim this would be really just a jean skirt, and ever since I saw Allison's from an older Burda issue I don't have, I've been hoping for a basic like this to reappear. It does qualify as safari, thanks to those generous cargo pockets and stitching details.

There are a couple of dresses which are standard items without so much as a single epaulet, but simply the addition of a pocket or two, even one sack which we'll call the 'safari nightshirt," but in short, Desert Rat colors guarantee no Mogambo buzz for me.

On an upnote, I'll give Burda a high score for those original trousers, which have just a hint of harem pants and thirties' loucheness to draw my eye.  I wouldn't be able to wear them well, because I have a high waist, but they are amazing in an era of eternal skinny jeans, and styled with the short jacket in the photo have a lot of panache. p.s. why is the model wearing shiny office loafers?

Thanks to Allison, I just realized that one of my favorite sewing bloggers is back from her maternity hiatus spent with her 'little prince' down in Portugual. Great to have you back on the blogosphere, Tany! You are looking amazing! Tany Knits and Sews

Posted by Inkstain at 00:48 No comments:

SEWING MOVIES! While waiting for the sewing mogo to return: Karl Lagerfeld's new movie The Return about Coco Chanel

Well, a blog entitled Chanel No.6 ought to line up for this one, n'est-ce pas? This little preview features Geraldine Chaplin talking about playing Chanel for Karl Lagerfeld's new movie, "THE RETURN." I have the impression she's not even close to catching the cigarette-husky tones of The Original, but unfortunately, she has captured that gaunt ferocious look that Chanel had in her later years. Let's hope the movie is good.

Because it seems to be a season of such 'hommage' movies and the one about Yves St. Laurent just released here in Switzerland is...oh...dear. Here's the preview for diehards. And this is why you don't have the government subsiding the survival of your film industry, copines.

Posted by Inkstain at 06:08 No comments: